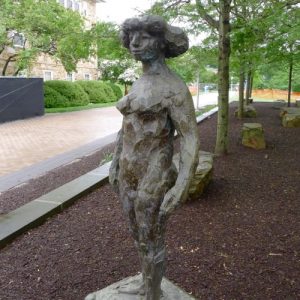 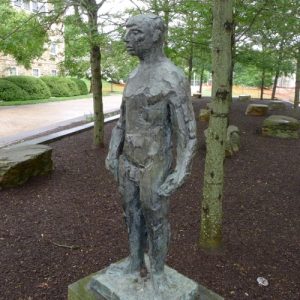 Reuben Kramer (1909-1999) was a Jewish American artist, primarily known for his sculptures. Kramer was born and raised in East Baltimore and began to draw at a young age and he soon discovered that he wanted to be an artist. His family largely did not approve of his choice, for his father wanted him to become a surgeon.

Despite his father’s wishes, Kramer enrolled in the Maryland Institute, College of Art’s
Rinehart School of Sculpture in 1927. Later in 1934 he was granted the very prestige Prix de Rome. As the winner, he was able to study at the American Academy in Rome for two years.

Kramer was a respected artist in the Baltimore area, and was primarily known for his clay and bronze sculptures of the human figure. One of his best-known works is a sculpture of Supreme Court Justice Thurgood Marshall, which stands outside the Garmatz Federal Court House in Baltimore1. He is also known for other public works such as a clay relief
sculpture of Frederick Douglass Homes that was created for Baltimore’s first public
housing project, as well as a bust of Governor Theodore R. McKeldin, which is housed in Baltimore’s State Office Building.2

During the Second World War he worked as a draftsman with the Design and Development section of the Army Ordinance at Aberdeen, Maryland. This is also when he met and married his wife, Perna Krick, who was a painter (Pratt Library).4

In addition to his art, he was also very involved and dedicated to the Baltimore community. For example, he was a co-founder of the Baltimore Art Center. He also taught art courses at American University, Jewish Community Center in Baltimore, and the Maryland Institute College of Art (MICA).

Upon his death in 1999, Kramer left his house and many of his drawings to MICA. The drawings were auctioned off and a portion of the proceeds went towards the MICA Annual Fund, which provides student scholarships. His house was converted to a visiting artist residence, known as the Kramer House.5

2 The following link contains information regarding Reuben Kramer’s archives, which
were given to the Pratt Free Library in 1975.
https://www.prattlibrary.org/uploadedFiles/www/locations/central/special_collections/fin ding_aids/MS%2013%20Reuben%20Kramer%20Papers.pdf

3 Kramer’s Walking Man was displayed in an exhibition of regional artists at the
Baltimore Museum of Art 1953. The following link has information about the show and a photo in which Kramer’s sculpture can be seen standing a top a pedestal.
http://collections.digitalmaryland.org/cdm/singleitem/collection/basc/id/13/rec/9

5The Kramer House is located on 121 Mosher St. and the following link includes a map
of the Maryland Institute College of Art’s campus. The Kramer House is building number
19 on this map:
https://www.mica.edu/Documents/mica_campus_map.pdf