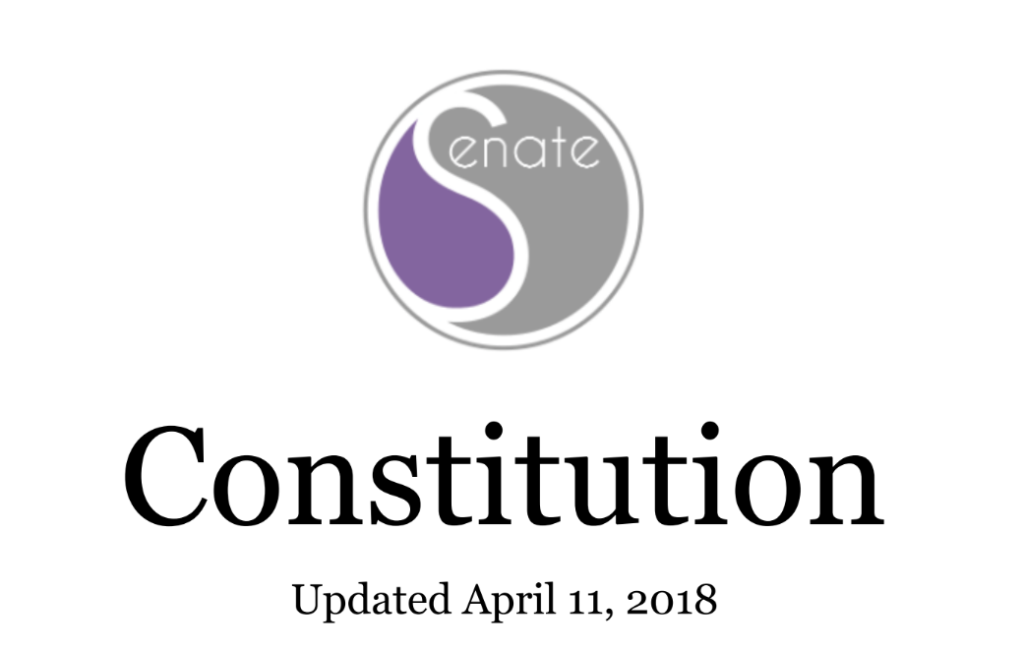 We, the students of Goucher College, in an effort to foster a sense of inclusion, equality, and fairness on campus, do hereby establish a student government endowed with the power and the responsibility to promote all aspects of student life and to unite the student body with every component of the Goucher Community. In fulfilling these responsibilities, Goucher Student Government shall serve as a coordinator of student activities and an advocate for student interests, promoting an open and equitable dialogue among the student body, alumnae/i, faculty, staff, administration, and trustees.

It shall be the mission of the Elections Commissioner to ensure fair, efficient, and democratic elections for Goucher Student Government.

The Elections Commissioner shall: Conduct and administer all elections and referendums throughout the school year, ensure that all election timelines allow equal and fair participation by the entire student body, announce and publicize all upcoming elections and election-related events and deadlines, publish both online and in-print on designated Goucher Student Government boards, a list of available positions with their powers and responsibilities, and organize and publicize a public forum for candidates to address the student body.

1.1.2: Selection of the Elections Commissioner

1.1.3: Compensation of the Elections Commissioner

All undergraduate students of Goucher College are qualified to run for and hold positions regardless of race, national origin, religion, age, disability, sexual orientation, and/or gender identification. Some positions may only be available to members of a specific class. In order to be eligible to run for and hold a position, candidates must be enrolled as a full-time student at Goucher College. The Elections Commissioner is ineligible to run for any Goucher Student Government office during the duration of their term. Students may run for elected office from abroad. Only one elected position may be held by any individual student at one time.

If a candidate does not submit a letter of intent before the deadline they can run in the election as a write-in candidate. Write-in candidates may campaign but may not participate in the candidates’ forum, nor shall they have their name on the ballot.

The November Election shall take place no more than six and no fewer than three weeks prior to the end of the Fall semester. This shall be the process for electing four Senators from each of the First Year, Sophomore, Junior, and Senior classes and electing the Senate President. Candidates may run from abroad. In order to be eligible to run for a position, candidates must be enrolled in Goucher College when Goucher is in session for the length of their term.

The April Election shall take place no more than six and no fewer than three weeks prior to the end of the Spring semester. It shall be the process for electing the Club Council Administrator and Treasurer. Candidates may run from abroad. In order to be eligible to run for a position, candidates must be enrolled in Goucher College when Goucher is in session for the length of their term. The selection process for the Appointed Members shall take place as soon as possible within one week of the election of the Club Council Administrator.

An election may be contested if a candidate objects to the conduct of the election and is able to provide specific allegations, which, if proven true, would have a probable impact on the outcome of the election. If a candidate wishes to contest the election, they must do so in writing within two days of the announcement of results. This objection must be submitted to the Elections Commissioner and the faculty or staff member who assisted in the tallying of votes. If an election is contested, each of the two branches of the Goucher Student Government shall randomly appoint three representatives that shall form a jury to hear the appeal case. The candidate contesting the election shall be allotted a reasonable amount of time to speak. In order for this appeal to pass, 2⁄3 of the jury must vote in support of the appeal. The Election Commissioner shall preside over the case but shall not have a vote as a member of the jury. This jury shall have the power to validate or invalidate election results, call for a recount, call for a special election and disqualify candidates.

Any student may bring a referendum to the ballot with a faculty or staff co-sponsor, and 200
student signatures. Upon collecting a faculty or staff signature, as well as 2oo student signatures, the referendum may then be presented to the Elections Commissioner and Senate President. It then proceeds to the student body at-large according to a timeline determined and published both online and in print on designated Goucher Student Government boards by the Elections Commissioner.

It is the mission of Senate to represent the students of Goucher College in all school affairs; facilitate communication with the staff, faculty, alumnae/i, and administration on behalf of the student body, spread information between the various groups it communicates with, and take action to create the best possible environment for students.

The Senate shall: Draft and approve resolutions, condemnations and commendations which represent the official position of the student body, draft and present ballot referendums for approval, appoint a Senator to assist in associated groups’ committee formations, form and work in committees to respond to issues brought forward by students, review, modify, and approve the Student Bill of Rights and Senate budget, and alter the Senate constitution through a 2⁄3 supermajority vote.

The Senate shall be composed of 16 Senators elected in November from the First Year, Sophomore, Junior, and Senior classes as well as a President and a non-voting Secretary.

Senators shall: Draft and vote on resolutions, draft and propose ballot referendums, approve appointments to Senate committee leadership, assign Senators to Senate committees at the first meeting of the session, liaise with members of the staff, administration, faculty, alumnae/i, and Board of Trustees, and serve on standing committee.

The President shall: Schedule, attend, and preside over all meetings of the Senate, serve as the tie-breaking vote in the event of a tie, Correspond directly and regularly with the President of the college, serve with the Club Administrator to select the Elections Commissioner and Senate Secretary when there is an opening.

The President shall be popularly elected during the November election to serve until the next presidential election. For more on election procedure, see 1.3.1.

3.2.3.2: Selection of the Senate Vice President

The Senate Secretary shall: Record the minutes of Senate meetings, publish the minutes online within three days of the meeting, maintain a public record of all Goucher Student Government Bylaws and publish online any alterations, keep a log of resolutions and motions, call roll, keep records of attendance, and ascertain quorum when requested by a Senator.

A Senate Secretary shall be selected through blind applications reviewed by the President. A Secretary will be selected at the end of the Fall semester and will serve for one year.

3.2.4.3: Compensation of the Senate Secretary

As compensation for their work, the Secretary shall receive a stipend of $125 for each seven week period of the semester during which they fulfill their responsibilities, amounting to $500 per academic year. The Secretary must complete a pay period in its entirety in order to be eligible for compensation.

The Community Relations committee is responsible for publicising Goucher Student Government created or sponsored accomplishments/events, management of social media platforms related to Goucher Community, and the creation and distribution of electronic and physical media to enhance community engagement with campus opportunities.

The Student Life committee is responsible for fostering student-driven decision making and engagement on campus, use best practices to ensure and improve the physical, emotional, and social health of the Goucher students and community, and coordinate with other entities including the Goucher administration, clubs and organizations, faculty, and any other pertinent entities capable of increasing student engagement with the Goucher community.

The Constitutional/Legal committee is responsible for reviewing and updating the constitution, writing briefings, letters, or other correspondence on behalf of the Senate, and, if called upon, draft or edit legislation/bylaws on behalf of other committees or Goucher Student Government in totality.

Senate must begin meeting within the first two weeks of each semester and at least twice every month Goucher is in session thereafter. General Senate meetings are open to students of the Goucher community. Senate Committee meetings can be open or closed at the discretion of the Committee Chair.

The Senate shall communicate with Club Council when a need for funding arises.

If the Senate Secretary position becomes vacant, the President will appoint a Senator to temporarily fulfill the secretarial duties until a new Secretary is selected. The Acting Senate Secretary will receive $10 compensation for each meeting that they work.

4.4.1: Impeachment of the President

4.4.2: Vacancy of the Presidential Office

If the Senate President position becomes vacant, the Vice President will serve as Acting President until a new President is elected by special election.

Article 5. The Student Bill of Rights

Right I: Free Speech
Students have the right to speak and express themselves freely. Students may congregate freely provided that college operations are not unreasonably obstructed. This right shall extend to all areas of student life and shall be protected in the utmost by the Student Government Association. Student media organizations, including but not limited to a school paper and radio station, are pillars of free speech that allow student voices to be represented both on and off campus. Student Government shall do everything in its power to protect and maintain these institutions. Harassment, slander, hate speech, and libel are not protected forms of speech.

Right II: Equal Protection
Students have the right to equal protection under the rules and regulations of all campus institutions and departments. Students shall be free from discrimination, which includes but is not limited to discrimination based on race, religion, sex, ethnicity, age, disability, gender identity, sexual orientation, political preference, and national origin.

Right III: Academic Freedom
Students have the right to pursue intellectual discourse in and outside of the classroom which shall not be inhibited for reasons based on their views. Students may invite and hear any person of their own choosing, with the understanding that guest speakers do not represent the views of
Goucher College. Students shall not be discriminated against based on their political beliefs.

Right IV: Participation in Campus Governance
Students have the right, individually and collectively, to express their views and participate informing campus policy which affects students, staff, faculty and the community as a whole. Students are to be notified of new campus policies and or changes in existing policy within 5 days of administrative decisions. This is to ensure dialogue and community input in important campus wide decisions. Constructive student opinions may be represented student
organizations that provide the opportunity for a public forum.

Right V: Free Press
Students have the right to a free press. Student journalists are free to write critically without interference or fear of retribution. A journalist may not be forced to reveal any information about his/her sources, documents, conversations, written exchanges, notes, recordings, and
methods, to the extent provided by the Maryland Shield Law.

Right VI: Privacy
Students have the right to privacy. Rooms shall not be entered without the occupying student’s permission unless there is suspicion of serious illegal activity, or if there is a threat to the health and safety of members of the community. Community Living also reserves the right to check rooms during breaks, but shall only inspect items left in plain view.

Right VII: Appeals
Students have the right to appeal any administrative, academic or disciplinary decision that affects them directly; including need based financial aid decisions and grades. All appeals are made in accordance with official college policy.