In November 2020, a librarian at the Goucher College Library was processing uncatalogued books in the Special Collections stacks when she discovered a copy of Zelda Fitzgerald’s only novel, Save Me the Waltz (NY: Scribner’s, 1932).  Copies are very rare.  Only 3010 copies were printed by Scribner’s (F. Scott’s publisher), not a shockingly low number for a first novel even by an author with strong family connections.  It was not well-received.  Rare book dealers typically report that it sold only 1392 copies, many of which, by now, have found their way to institutional libraries.  Princeton University has Scott Fitzgerald’s copy along with most of his private papers and manuscripts.  Scott fiercely opposed Zelda’s publication of the novel because it was based in large part on the couple’s intimate relationship.  Scott believed he had sole right to mine this material, including Zelda’s diaries, for his own novels, including Tender Is the Night, which he would finally publish in 1934.  This opposition may have accounted for the low sales and Zelda’s novel’s rarity.

This would be “copy 2” in Goucher’s collection, which might explain why it remained uncatalogued for decades after its donation, by H.L. Mencken, along with the rest of Sara Haardt Mencken’s library, to her alma mater and former employer (English Department).  Her death in 1935, after only five years of marriage, left him grief stricken.  This double “association copy” is both poignant and important.  Inside the front cover is a pasted-in label with a gift inscription from Zelda to Sara that shows evidence of their friendship, and of Zelda’s tragically worsening mental health.

Save Me the Waltz was completed in the period when Scott and Zelda lived in Towson and Baltimore, where they entertained the early C20 art/lit crowd even while their health fell apart.  After a fire at La Paix, the Towson mansion they were renting while Zelda was being treated by psychiatrists at Johns Hopkins Hospital, they moved to 1307 Park Avenue in Baltimore.  The house is a fifteen-minute walk from the Menckens’ apartment at 704 Cathedral Street.  But Scott’s rapidly increasing alcoholism and Zelda’s schizophrenia soon put an end to their public life.  Before the end, however, Zelda may have remembered her conversations with Sara Haardt in Hollywood when Sara was writing for the movies, before her marriage to Mencken.  Zelda’s decision, in 1933 or 1934, to send Sara a copy of her novel, seems both sensitive and possibly significant, a gesture by  one woman writer to another, both married to more famous male authors but with much different relationships.  Whereas Scott Fitzgerald opposed Zelda’s writing, H. L. Mencken supported Sara’s work and treated her as an equal.  Sally Cline (2002) has written that Zelda and Sara earlier had discussed Sara’s writing project about women married to famous men.  Their shared experience of trying to break into print while married to well-established authors may have been on Zelda’s mind as she addressed the “seasons greetings” label “To Sarah [sic] / Merry Christmas / Zelda Fitzgerald.”  Her handwriting tells its own story.

The erroneous “h” Zelda added to Sara’s name really is a separate character, as if an afterthought, following “Sara,” which appears to have been written as a dip-pen was running out of ink.  Scott Fitzgerald was a notoriously bad speller, but nothing in Zelda’s surviving manuscripts suggests she shared the affliction, especially regarding the name of a lifelong friend she first knew when they were children in Montgomery, Alabama.  Rather, her pen work seems to have been under some physical and/or mental strain.  The ink is smeared on the “S” of “Sara,” and on the “t” and “ger” of “Fitzgerald.”  The word, “Christmas,” is barely legible.  Comparison with her 1919 signature, as “Zelda Sayre” in her copy of Wilde’s Picture of Dorian Grey (auctioned by PBA Galleries  in 2007), shows the confident, controlled pen work of a woman declaring ownership of a well-read book.  The gift inscription appears to be written by someone barely holding on.

Neither woman had long to live as a fully functioning adult.  After long illness, Sara Haardt Mencken died of complications of tuberculosis in 1935, and in the following year Zelda Fitzgerald was transferred to Highland Hospital, Asheville, North Carolina, where she would die in a fire in 1948, eight years after Scott’s fatal heart attack in Hollywood.  H. L. Mencken never remarried and died in 1956.

Arnold Sanders is Emeritus Professor of English at Goucher College where he teaches Literature 341, “Archeology of Text,” in alternating Fall semesters (Fall 2021): http://faculty.goucher.edu/eng241/ 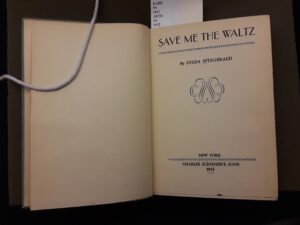 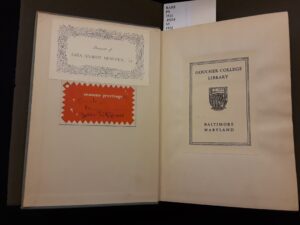 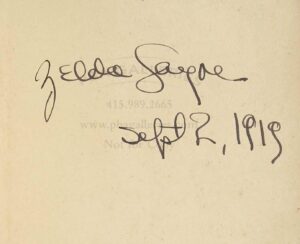