The Women’s College of Baltimore, now Goucher College, was located within the city limits of Baltimore where students, faculty, and staff were exposed to an active suffrage movement that included meetings, discussions, and marches. In the 1890s and early 1900s, it was still a radical idea. Yet more people became convinced that women’s civic duty included voting. This timeline examines the suffrage movement in the Baltimore-Washington DC region and the role of Goucher College.

All images are provided by Goucher College Special Collections and Archives. 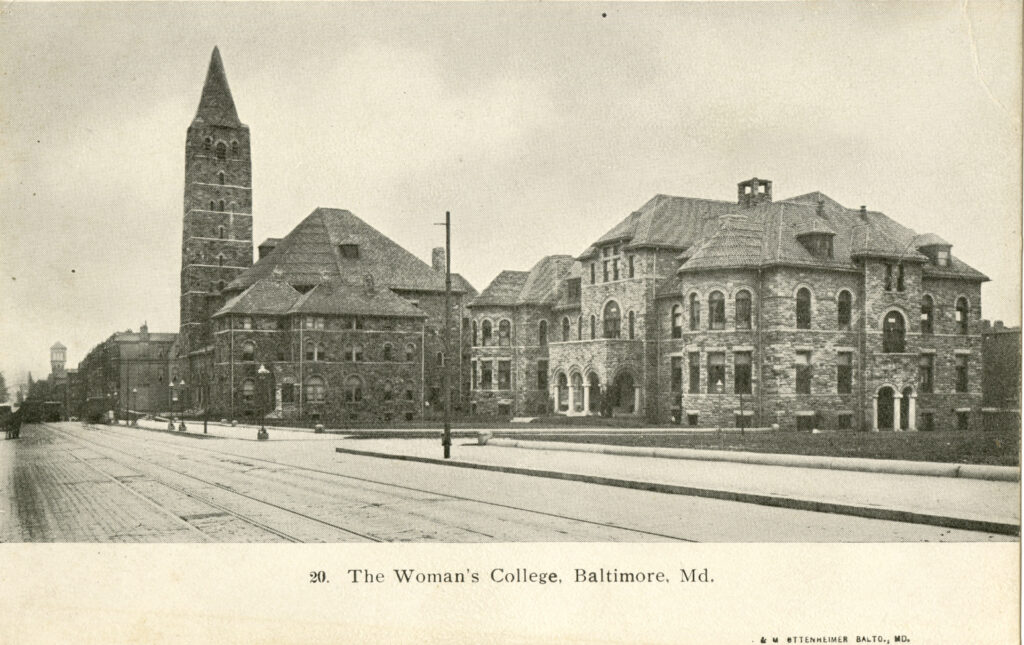 In April 1894, Professor Thaddeus Thomas of the Women’s College of Baltimore held a suffrage debate in one of his sociology classes.

Dr. Thomas held another suffrage debate in class in March 1898. Mary Countryman ’99 (pro-suffrage) challenged Mary McClosky ’99 (anti-suffrage). When the debate ended in a tie, Prof. Thomas broke the tie by voting for the suffragists.

Emma Maddox Funck, President of Maryland Women’s Suffrage Association and Mary Elizabeth Garrett, wealthy Baltimore suffragist, convinced the National American Women’s Suffrage Association (NAWSA) to host their 38th annual convention in Baltimore from February 7 – 13, 1906. The successful event increased support in the movement and is considered a turning point where older leaders passed the torch to the younger generation of leaders.

Just Government League (JCL) is founded in Baltimore in 1909 by Edith Houghton Hooker and hosted open-air and parlor meetings. The Women’s College was actively involved with the JCL and often held JCL-sponsored events. Many alumnae joined the JCL after graduation. By 1915, it was the largest group of women suffragists in Maryland and merged with the Maryland National American Women’s Suffrage Association in 1916.

Prof. Thaddeus Thomas spoke at an Equal Suffrage League Meeting in October 1909, and his speech was published the following year. 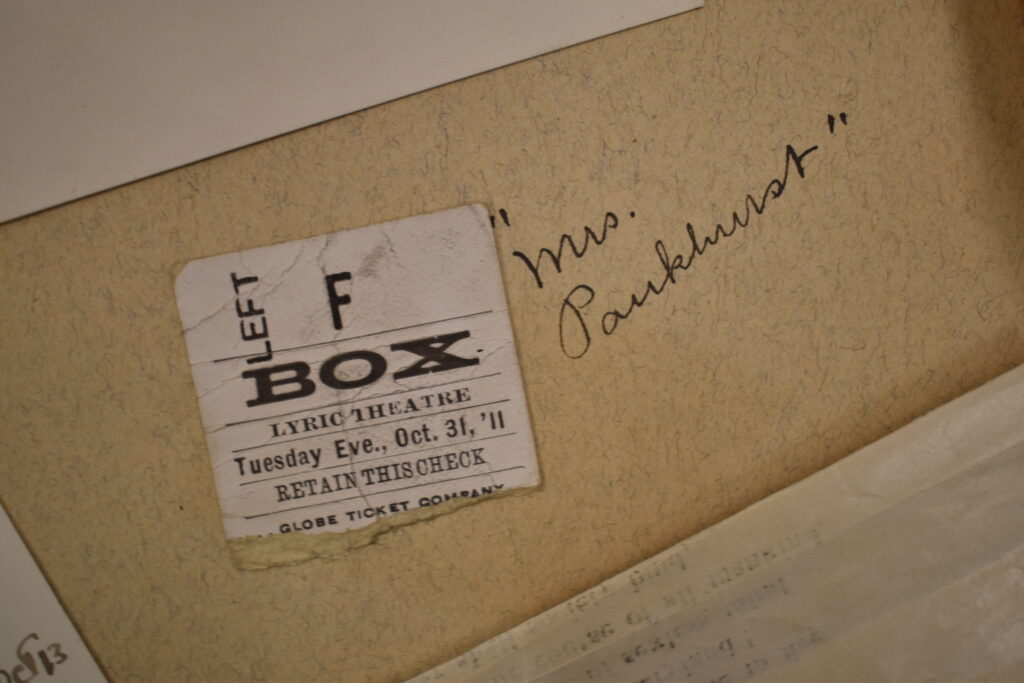 NAWSA organized a Suffrage March for March 3, 1913 — the day before President Woodrow Wilson’s inauguration. A crowd of 500,000 people watched 5,000 suffragists, including 100 Goucher students and faculty, march through Washington DC.

In April 1913, Alice Paul of NAWSA created the Congressional Union for Woman Suffrage (CU), a committee within NAWSA that focused on passing a constitutional amendment for suffrage. Alice Paul and Lucy Burns believed that CU should use more militant, but non-violent, strategies to achieve their goals. With NAWSA in disagreement, the CU and NAWSA parted ways in June 1913. In 1917, the CU officially merged with the National Woman’s Party.

8,000 suffragists marched in the Baltimore Suffrage Parade on May 31, 1913. This successful event organized by the Just Government League and other local suffrage groups brought a crowd of 50,000 people to Baltimore. Dr. Mary Sherwood, Goucher College trustee and friend of Dr. Lilian Welsh, was the marshal for college women.

In November 1915, Inez Milholland Boissevain, popular suffragist, spoke to the Goucher community. Lilian Welsh introduced her, and President Guth offered supportive remarks. It was her last full speech before her sudden death.

On January 6, 1916, Goucher College hosted its first regular meeting of their Chapter of the National College Equal Suffrage League (an organization under NAWSA). Two hundred fifty people met in the gymnasium in Bennett Hall. Ida Glatt ‘17, an active suffragist in Baltimore and DC, was president, and Dr. Lilian Welsh was faculty advisor. During the meeting, three students reported on attending a national conference on suffrage in December 1915: Edith Robertine Lyon ‘18, Evangelyn Barsky ‘16, Esther Moses ‘19.

Alice Paul and the CU formed the National Woman’s Party (NWP) in 1916 to include women who were already enfranchised. The CU and the NWP merged in 1917. The NWP was known for its militant tactics and pickets on the White House from 1917-1919 where many NWP members were arrested.

The NWP was the first group in American history to picket the White House.  The women promised to protest six days a week, all day long until women had the right to vote on a national level. They were called the “Silent Sentinels” because the protesting women did not speak.

The NWP planned themed protest days outside the White House. College Day was held on February 3, 1917, and NWP wanted Goucher students to participate, not only because students and faculty had been supportive in the past, but because President Woodrow Wilson’s daughter, Margaret Wilson, was a student at Goucher. The NWP thought it would receive great press if the President’s daughter participated.

Just Government League merges with the Maryland Chapter of NWP on June 29, 1917. 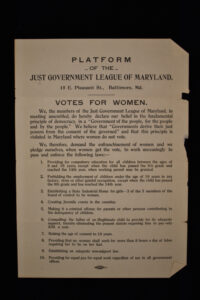 Feb. 1919- President Guth showed his support for the Woman Suffrage League of Maryland by signing an endorsement for suffrage with 30 other Baltimore leaders.

Aug 18, 1920 – Tennessee became the 36th state to ratify the 19th amendment, allowing the federal government to ratify the amendment in the US Constitution. 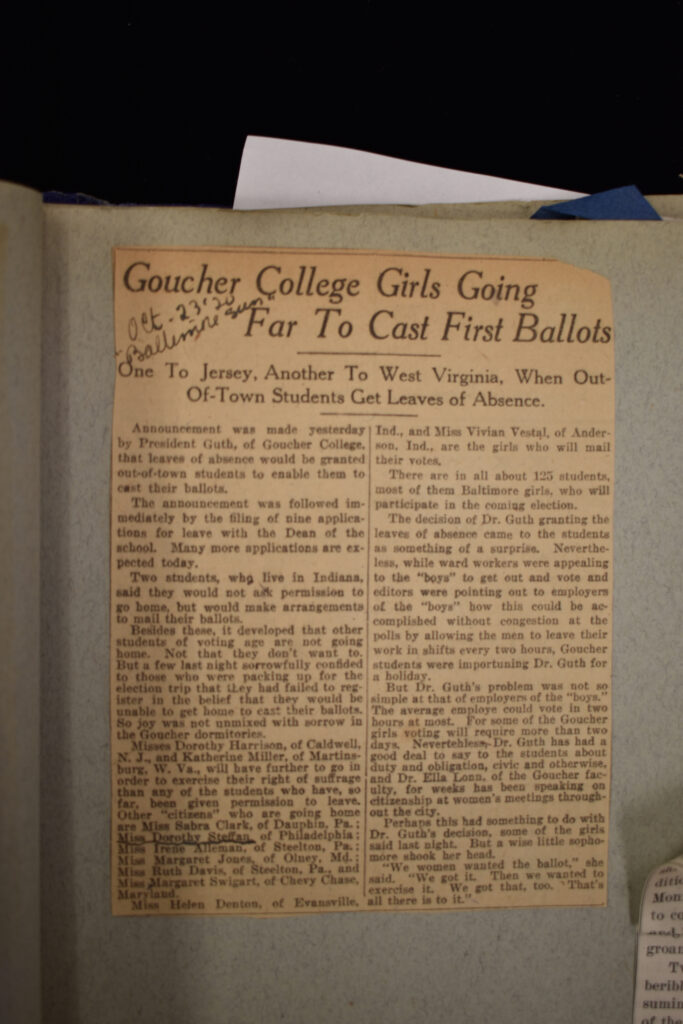 Legacies of the Suffrage Movement

Once the amendment passed, suffrage groups shifted their goals to support women with their newly acquired civic duty. In 1920, NAWSA restructured into the League of Women Voters. It was formed to give support to new women voters. The organization is still in existence today.

The National Women’s Party reorganized in 1922 in order to focus on women’s rights and fight against discrimination of women. Alice Paul drafted the Equal Rights Amendment in 1923 calling it the Lucretia Mott Amendment. The NWP shifted from a lobbying organization in 1997 to an education organization.