American women started a unified national campaign for equal voting rights in 1848 at the Seneca Falls Convention where over 300 people listened to suffrage leaders Elizabeth Cady Stanton and Lucretia Mott. Women, with the support of few men, hosted several women’s rights conventions and worked closely with supporters of abolitionists until the outbreak of the Civil War in 1861. Once peace returned to the nation, women quickly organized women’s newspapers and local and national organizations and clubs. When the 15th Amendment passed in 1870 granting African American men voting rights, suffragists were infuriated because women were not included. Meanwhile, states west of the Mississippi slowly granted women voting and property rights, but it was a far cry from the necessary thirty-six states needed to ratify the amendment before it became a federal law. In 1920, Tennessee took that honor. 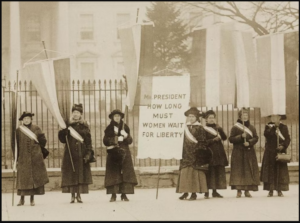 Campaigners picket the White House in 1917 (Library of Congress)

Goucher College students and faculty played an important role in the women’s suffrage movement. Situated in Baltimore City, which was an important center for the national suffrage movement, Goucher students and faculty bravely joined sister suffragists in marching, protesting, and picketing for women’s right to vote.  This exhibit highlights some of the important dates, events, and people from Goucher College that contributed to suffrage efforts.

Women of Color in the Suffrage Movement

Although women gained the right to vote, many women still could not, particularly women of color and women of lower economic status. Some of the obstacles that women and other marginalized groups faced included state-issued poll taxes, literacy tests, or threats of violence at polling stations. It was not until the 1965 Voting Rights Act that women (and men) of color achieved full voting rights. No African American women applied to Goucher College until the mid-1950s, but the college hired African American employees. While conducting research for this exhibit, we found no documentation that Goucher women reached out to suffragists of color which was quite typical of the time period. The passing of the 19th Amendment was not a guarantee that all women were allowed to vote.

For decades leading up to the ratification of the 19th Amendment, white suffragists rarely included women of color in their pickets, marches, protests, private events, or parlor discussions. Women of color acted on their own under the leadership of Mary Church Terrell, Sojourner Truth, Frances Watkins Harper, Augusta Chissell, Estelle Hall Young, and Margaret Gregory Hawkins. They fought not only for women’s right to vote, but for other issues involving race and housing.

The Progressive Woman’s Suffrage Club and the DuBois Circle met in the homes of leaders and the local Colored Y.M.C.A. These clubs hosted speakers and worked on civic projects for community welfare along with women’s right to vote. After the 19th Amendment was ratified, Augusta Chissell wrote a weekly article for the Baltimore Afro-American called “A Primer for Women Voters” to educate women on the voting process and their new civic role. It was not until the 1965 Voting Rights Act that women (and men) of color achieved full voting rights. 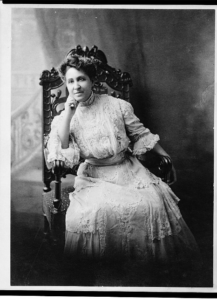 Mary Church Terrell was a leader in both suffrage and civil rights movements in the late 19th and early 20th centuries. She was one of the founders of the National Association of Colored Women (NACW) in 1896 and served as president of the organization from 1896 – 1901. (Library of Congress) 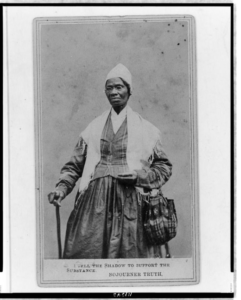 Sojourner Truth was an ardent supporter of abolition, temperance, and women’s rights. After gaining freedom from slavery in 1826, she continuously fought for abolitionism and equal rights for all. (Library of Congress) 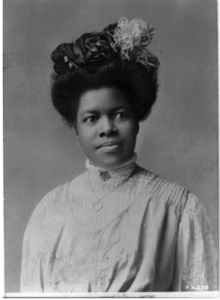 Nannie Helen Burroughs was an educator, suffragist, and civil rights leader. While living in Washington DC, she worked hard for equal voting rights, for education for women, and for civil rights for African Americans. (Library of Congress)

Laura A. Moore Westbrook was an educator and a suffragist. She became a member of the Texas chapter of the Women’s Christian Temperance Union (WCTU) which was the first chapter in the country to endorse equal voting rights for women. (Library of Congress)