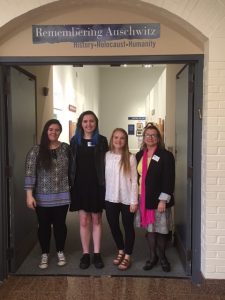 On April 9 2017, four Goucher students who are currently taking Dr. Uta Larkey’s class “Literature and Film of the Holocaust” presented at the Holocaust Student Symposium. The event was sponsored and hosted by the Jewish Museum of Maryland. The symposium gives students the opportunity to publicly share their work while also inviting audience discourse and feedback.  The Goucher students explored topics such as the “Aktion T-4” – a program during which more than 70.000 people were killed in psychiatric institutions -, children in hiding during the Nazi regime, and individual stories of Holocaust survivors and non-Jewish victims. Dr. Larkey and Dr. Martin Shuster – who is currently teaching “Ethics after Auschwitz” took both of their classes to the event – a total of 30 Goucher students. All of the students attended the symposium and explored the current exhibitions in the Jewish Museum of Maryland after the presentations.