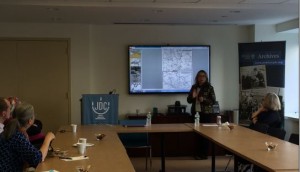 On October 12, Dr. Larkey gave a talk at the American Jewish Joint Distribution Committee (JDC) in New York City.  Her talk was titled Collecting Memory/Narrating Horror: Early Post-WWII Testimonies by Jewish Displaced Persons in the U.S. Zone.
For this talk, she presented testimonies gathered by the Central Historical Commission (Tsentrale Historishe Komisye) in Munich. The Commission was charged with collecting individual stories of survival and bearing witness and chronicling the histories of destroyed Jewish communities. Her research questions concerned the treatment of subjective testimonies as historical documents, the use of languages and linguistic choices by survivors from multilingual prewar Jewish communities in Central and Eastern Europe as well as the specificity of ways in which eyewitness accounts were collected and narrated.