Hi there! My name is Samantha Fried. I’m a PhD student at Virginia Tech in Science, Technology & Society (STS), and a Graduate Research Fellow in the Remote Sensing IGEP, or Interdisciplinary Graduate Education Program. 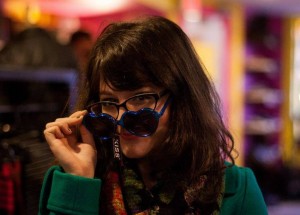 Broadly speaking, my remote sensing group works on issues pertaining to satellite development. It is an interdisciplinary group because those issues are interdisciplinary at heart: the engineers design and built the satellites, the foresters understand the tree chemistry on which those satellites are collecting data, the statisticians analyze that data, and the STS-ers study all of those scientists doing what they do! 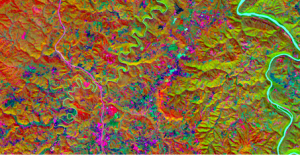 Here’s an image of Southwest Virginia, where I live, collected by Landsat-8. It looks all cool and rainbow-y because I ran something called Principal Component Analysis on it. It’s a statistic that cuts “unnecessary” or “repetitive” data. I use scare-quotes because it’s my job to question algorithms that simplify. 🙂

STS, too, is an interdisciplinary field. It encompasses the history, philosophy, sociology and anthropology of science. Scholars in my field study the ways in which knowledge is produced, what constitutes “trustworthy” knowledge, how knowledge is represented, etc. If you’d like to read more about my field (which I think is awesome and deserves your further reading attention, natürlich), I’d actually recommend checking out the STS Wikipedia page or Concepts in STS, a page created by another STS department at Rensselaer Polytechnic Institute.

Actually, I first learned to appreciate interdisciplinary themes in the German department at Goucher. I majored in Communications and Media Studies (my focus in Comm was primarily critical theory of film and television) and minored in German. Antje and Uta encouraged me to to design an interdisciplinary independent study that combined these subjects. The result was a course called Women in German Heimatfilm. Heimatfilms are those pertaining to a strong sense of German patriotism. They can be straightforwardly nationalistic, but can also be critical. Many of the films I watched in this course acknowledged both of these themes (think: The Sound of Music). Through this independent study, Antje introduced me to some of my all-time favorite movies: particularly Das Schreckliche Mädchen (The Nasty Girl) and Die Siebtelbauern (The Inheritors).

I learned another important theme when I was a student in the German department that I carry with me in my research now: not all words, phrases, and ideas translate across languages. Problems that occur when we expect things to translate neatly are a feature of multiple meanings; connotation; symbolism; complexity in our rhetoric. There is always nuance behind what we say, and no language exists in a context-less vacuum. I suppose I also should specify, then, the nuanced meaning that I’m applying to the word language here. In the context of this blog post, the word language has two different connotations: language as a mode of dialectical representation, and language as a mode of disciplinary representation. Simply put, just as words and concepts do not always cleanly translate from English to German and vice versa, words, concepts, and symbols do not automatically translate from, say, History to Biology and vice versa.

So, let me walk you through my musings on this. People in the U.S. grow up with a different cultural history, different practices, and different identities from people in Germany and other countries, of course (naturally, there are dominant and subjugated narratives that are reflected within sub-dialects, but for the sake of time I won’t expound on that). As language is situated within those different contexts, words and concepts naturally evolve to represent those different cultural histories, practices, and identities, in subtle and less-subtle ways. I’ll use the word Heimat as an example. Sure, it means home. But it means something other than home as it is inflected in English. It means something like, a home that exists in your heart, that you feels very strongly about and connected to. A Heimat isn’t necessarily where one sleeps or where one grew up. It’s where one belongs.

We don’t have a word for that in English. I just explained what it means, roughly, using English words. But there is no direct translation. Why? I don’t think there is an easy answer. But I would conjecture that this very particular cultural concept doesn’t exist as strongly or pervasively in English-speaking countries. The historical events that led to this are complicated and varied, and I’m not sure it is possible to trace all of them or understand them in their entirety. But I do think it is significant and fascinating that there is no English-language counterpart for the word Heimat — and that the explanation for this instance of lost-in-translation is culturally-situated.

Believe it or not, this kind of revelation also maps onto my interdisciplinary remote sensing group. For instance — and please note that I am way oversimplifying — the idea of lens means something different to an electrical engineer than it does to a philosopher of science/technology. To an engineer, it’s the curved piece of glass that one sees through; to a philosopher, it’s the theoretical framework through which one views or approaches a problem. And when in a conversation about a lens, the electrical engineer and the philosopher might talk past each other, totally misunderstanding where the other is coming from. These disciplinary misunderstandings actually have a name in my field: STS-ers say these misunderstandings manifest in the form of incommensurability (T.S. Kuhn, 1962). We would say that the philosopher’s idea of lens is incommensurable with the engineer’s idea of lens. Some translational work has to be done so that the philosopher and the engineer ultimately understand each other. And in order to do that translational work, we must first be aware that these instances of mistranslation exist in the first place!

This was a roundabout way of showing you how the things I learned almost 10 years ago in the German department are things I think about every single day. Even if you never use your Goucher-required language-lessons again (which is doubtful), I still think there are important lessons to be learned when you grapple with a second language. After all, language is way more than a bunch of words. It’s a manifestation of culture and, in turn, I think that culture is a manifestation of language as well. Goucher’s German department has a knack for keeping the themes of culture and language close. This pedagogical approach helped me to become more thoughtful about symbolism, and this thoughtfulness translates to to the stuff I think about now. If you’re not convinced that this is important, I will add that I also met some of my favorite people in the German department. And that I learned how to use and pronounce words like merkwürdig and Krankenhaus and Wiedervereinigung and Tschüss, which I think I’ll say now. Tschüss!

*Important Note: the concept of incommensurability was introduced by T.S. Kuhn’s Structure of Scientific Revolutions, a highly influential volume for STS. It’s a total beach read.

Samantha completed her MA in Communication, Culture & Technology (another interdisciplinary program!) at Georgetown University. There, she wrote a thesis about the origins of population-counting and quantification of personhood in Germany, France, and the United Kingdom. It’s entitled, Quantify This: Statistics, the State, and Governmentality.