Throughout this semester we will be screening the new German TV series “Deutschland 83”. Watch for upcoming screenings on this page: 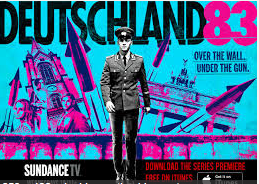