The evolution of a revolution for Black culture

Uneeda Brewer ’70 was bereft, stunned, by Martin Luther King Jr.’s assassination. Other Black leaders had been assassinated, but none like King, who had traveled all through the South visiting small communities—including hers—to inspire others into peaceful protest despite their fear.

As a reaction to the assassination, Brewer and 13 of her classmates banded together as the Black Students’ Association, or BSA. Fifty years later, their mission continues on Goucher’s campus as Umoja: The African Alliance, sometimes referred to as Umoja: Black Student Union. Goucher honors their 50th reunion with an exhibit in the Athenaeum as well as a celebration in the fall. (Contact the Office of Alumnae/i Affairs for more information.)

The BSA confronted Goucher with a list of demands to “eradicate practices which contain or tend to perpetuate, inadvertently, racial and cultural prejudice,” wrote Pauline A. Bigby ’70, one of the BSA’s founding members, in Goucher Alumnae Quarterly, fall 1969. The publication is now Goucher Magazine.

Because of the members’ consistent and determined efforts, Goucher created a non-credit bearing course on institutional racism and six Black studies courses that included the accomplishments of Black people, hired a Black visiting professor, and brought Black speakers to campus. The BSA members also created a letter-writing campaign and visited high schools to encourage Black students to attend Goucher. “No longer is Goucher ‘lily-white,’” the BSA wrote in one letter. “There is a Black scene on Goucher’s campus, and we want the opportunity to share it with our Black students.”

Not that these efforts were the solution to racism and ignorance, but they were a start. As Bigby also wrote, “Goucher needs a community based not on articles and bylaws but on understanding and tolerance.” 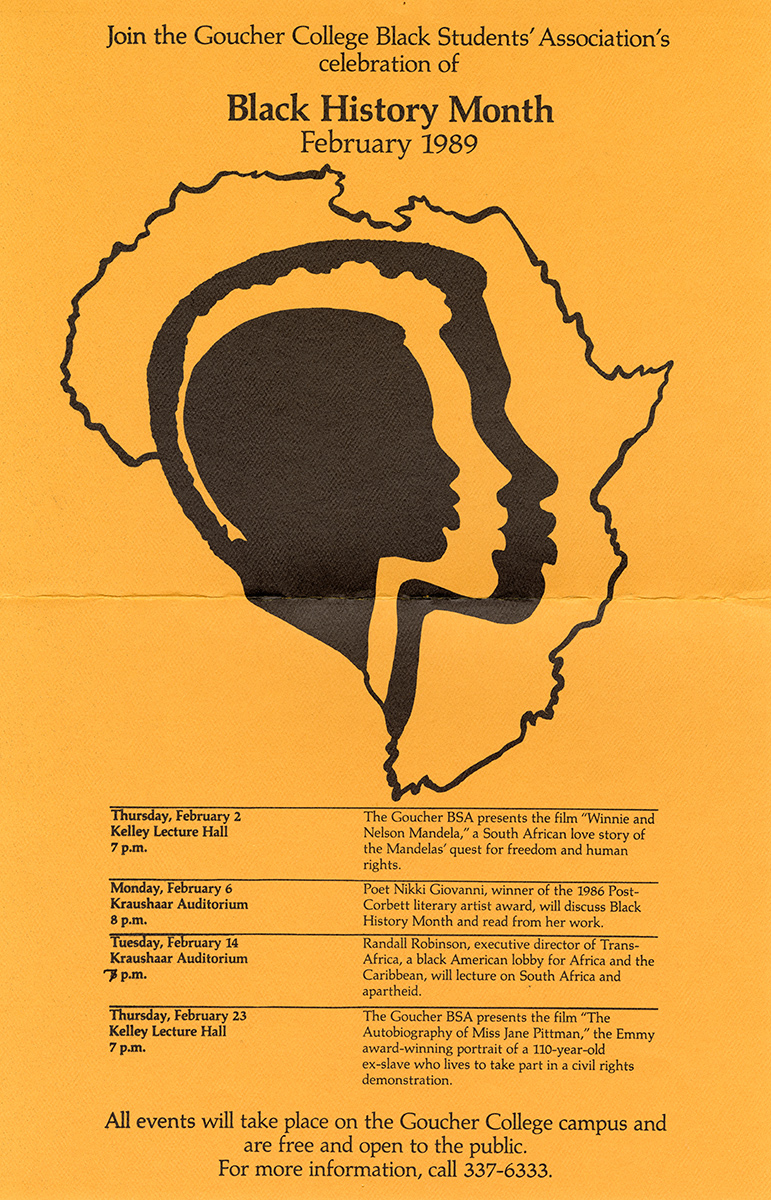 Yvonne “Bessie” Owens Everett ’73 was not a founding member, but she became involved in the BSA when it was especially influential on campus. As an art major, she used this outlet to explore her Black identity, experimenting with the cubist movement, which has roots in African art, Everett says. Her professor, whose focus was in optical art and photorealism, was harshly critical of Everett’s work. “When I graduated, he said, ‘If you wanted to do Black art, then you should have gone to a Black school,’” Everett recalls.

Shortly after that professor’s comment, Everett received the Thomas A. Watson Fellowship to study abroad for one year. Someone on the scholarship committee told her, after he had examined her art, that the award would not be based on grades “but what we think you can contribute to the world.” Everett continued to promote Black art, painting murals in a church and other public spaces.

The BSA’s presence on campus fluctuated throughout the years, organizing protests, fashion shows, Black speakers and artists, and eventually evolving into the Umoja that students know today.

“It’s humbling,” Brewer says, to watch the BSA evolve. “The seed of what we created has blossomed into what is needed now.”

Ridwan Lawal ’20 joined Umoja in his first year at Goucher and became president as a sophomore. Lawal has met many BSA and Umoja leaders who are still promoting Black lives. Those conversations were powerful, he says, and made him realize that activism doesn’t end when he graduates. “All of the ladies who have been a part of the Black Students’ Association, honestly, I praise them every day,” Lawal says. “They are amazing. Their stories live forever in my heart, forever in my head.”