Ghosts of Goucher: Whispers from the ones who never left

What stories live in the basement of the former library archives, a windowless home of narrow aisles sneaking between dusty shelves and molding histories? To enter, students had to ring a bell across dimensions where Goucher’s past sifted through time and memorabilia, situating itself in neither death nor life but fleetingly in between. Prickling the tiny hairs along an exposed neck is a silent whisper and drawing frost from the marrow of a spine is a ghost story.

The ghosts of Goucher, in their own way, live on through the stories we tell, which is maybe what they wanted all along—to be remembered.

We’ll start with the library archives, which used to be in Julia Rogers. As Christine Krieger, New Student Programs associate director, recollects, it was during the historic October snowstorm of 2011 that Goucher students were terrified, twice, from a scary tour that was never meant to be real.

In celebration of Halloween, the Student Programming Board hosted a haunted tour of Goucher. That night, student volunteers were in the archives preparing for the tour when they called out to Krieger, who was walking along the other end of the shelves. When she didn’t respond, one of the students said, “Wait, Christine’s not here.”

Krieger was in her car, getting pizza for her students, a detail that is especially vivid because of the freak snowstorm. When Krieger returned, all of her students were huddled on the main level of Julia Rogers, looking as if they had seen a ghost.

The woman they had seen, Krieger’s doppelganger—medium build with long, dark hair—might have been Jo Mears, who had died several years prior. That’s the first thing Sydney Roby ’72 said when she heard the story. Roby worked in the library and archives from 1989 to 2005 and had several experiences with apparitions, including one with Mears, who also worked in the library. Roby felt honored, delighted, and comforted to have seen her dear colleague one more time, and she says Mears was “a good friend I would like to see again, in any form.”

Before Mears’ appearance, however, Roby saw Otto Kraushaar, Goucher’s president from 1948 to 1967. Kraushaar technically never left Goucher, as his ashes are interned in a stone bench in the academic quad and his spirit is still percolating through a thin skin of two worlds. Roby found Kraushaar by his memorabilia—a cane, fedora, and wooden desk chair—stored in the archives. “He had white, closely trimmed hair, dressed in a suit, and stood with his hands clasped behind his back. I got the impression that he was a real gentleman, contemplative,” Roby recollects clearly. 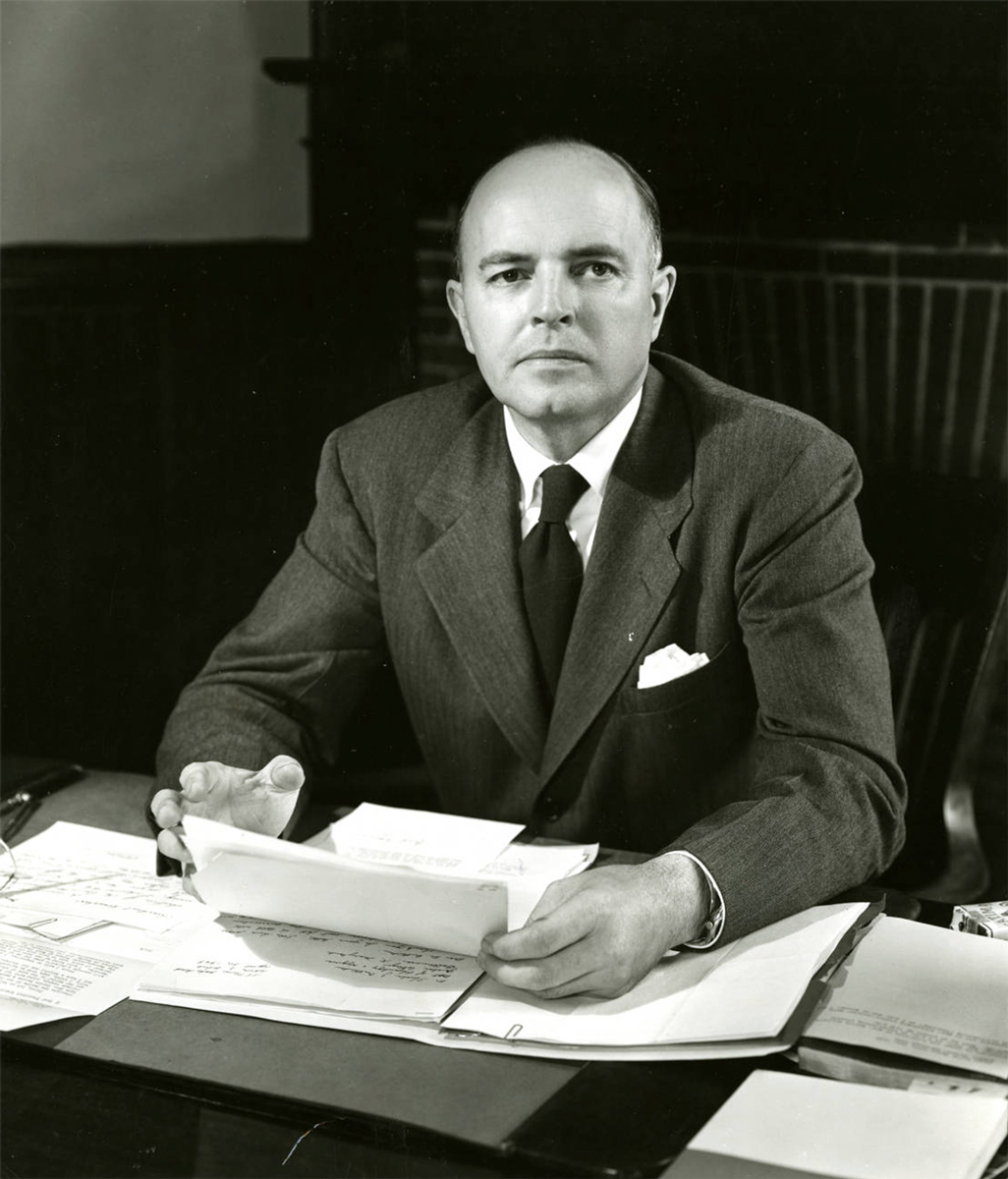 Roby also saw the unmistakable Lillian Welsh, chair of the Physical Education Department from 1894 to 1924. Welsh appeared by some of her papers in the archives, but as Roby says, “I’m not sure she approved of me. She glared.”

These one-time appearances of Mears, Kraushaar, and Welsh are in a long list of supernatural experiences across campus, and Kraushaar is one of three presidents interned on campus, although neither Rhoda Dorsey nor William Guth have appeared as ghosts. Dorsey is by the fountain in the Dorsey Center Courtyard and Guth and his wife are just behind the right-hand stone column of Goucher’s main entrance.

“Our ghosts are there because they care deeply about the college, and they want to stick around to make sure everything is OK,” Roby says. “Ghosts can warn people and look after them. They are rarely unpleasant. Evil people become evil ghosts.”

Roby has fond memories of her ghosts and is always searching for her next visitor. “From what I’ve read, water can record events, much like magnetic recording tape, and ghosts are captured somehow,” Roby explains. “Some want to be with us, so they can watch over us, and others are caught in limbo for some reason.”

Roby follows her astrology natal chart, which is a map of a person’s zodiac sign and elemental characteristics—fire, earth, air, and water. Roby’s chart pairs her with a water element, which is why she sees ghosts. “I am receptive. I am truly interested in other beings. Yes,” she says, “I have seen UFOs and angels. Yes, I am obviously wacko. Have you ever looked at a dragonfly or spider? How much more alien can it get? Yet, we intermingle. I can’t say comfortably, alas.”

Yes, indeed, Krieger’s students would probably agree to the discomfort of paranormal activity. The same night as the Halloween tour, there was another incident, shortly after the first.

Students led a tour group into the archives, but when they went to leave, the doors wouldn’t open. Nobody in the group had closed the door. And, most peculiarly, the doors weren’t locked.

Krieger ventured into the basement to find her students once again terrified, but this time stuck inside the archives. It took her about 10 minutes of pushing, using her entire body, to open the door. Finally, the door opened, and her students scrambled out of the pretend scary tour turned true ghost story. As a test, Krieger closed the door. It opened just fine.

Lilian Fernandez ’22 and Devin Brashear ’22 are roommates and soon to be ghost hunters. This fall, they moved into Heubeck Hall’s Gamble House a week before other students for resident assistant (RA) training. After a day of rearranging their beds, desks, and wardrobes, Fernandez and Brashear settled in for the night. Tucked into their beds, they heard a chair scraping across the floor. It sounded like it was coming from inside the room—not next door, not from below, and not on the roof above them. The fact that Fernandez and Brashear were the only ones moved into the hall confused them because who, then, could be moving the chair?

The room contains all wooden furniture on a laminate floor, which muffles the sound of a chair. This ghost chair was louder, mimicking the sound of large furniture sliding across the floor but with the same cadence of a chair dragging for a few seconds, pausing, and then dragging again.

“It sounded like it was in the room. It was crazy,” Fernandez says.

“We tried to logic our way through everything,” Brashear adds. “But our window wasn’t open, nothing had fallen off the walls, the wardrobe hadn’t opened.” Not even the chair was out of place.

That same night, Brashear got up to use the restroom down the hall. When she opened their door, the light in front of their room was out. All down the hall the lights were on, except for theirs.

Since that night, their hall has been much louder, but the Gamble Ghost has kept quiet, maybe because of shyness, speculates Fernandez. “They found their peace, and they’re happy with the room layout,” she jokes. When Fernandez goes home next, she’s bringing her Ouija board to campus.

Brandon Rodriguez Torrento ’21 grew up with the ghost of his father for most of his childhood. Small things—phantom keys hitting a glass table, his dad’s work boots pounding the stairs—followed him and his family through their house. He has much more elaborate tales—ask him about his phone sliding across the dresser unassisted or the shadowy man and an unexplainable open door. These experiences are why he wasn’t afraid, surprised, or doubtful when a ghost met him on his rounds through Tuttle House in Froelicher Hall.

An RA as well, Rodriguez Torrento was doing a training round through Froelicher before students arrived. When he got to the third floor, he let the door close behind him, as it does naturally. As he was walking down the hall, Rodriguez Torrento heard the click of a door opening and then closing. “And when those doors close, they close heavy,” he says. “When I heard the door open, I was like, shoot. And then I heard it close and I was like, ‘Yep, that’s a ghost.’

“I tell people, and they always laugh. The Tuttle Ghost is out there, and my theory is that she’s finding her home,” Rodriguez Torrento says, rationalizing that the ghost is a woman because Goucher was originally a women’s college. He thinks that when Froelicher was moved across campus, it confused the ghost, who is looking for her old room.

Alison Hill ’20’s ghost isn’t lost, just bored and playing tricks. She and her roommate were in Stimson Hall and joked that Hill’s personal “ghostie” was making the lights flicker and then stop altogether on her side of the room.

Then one day, they realized it wasn’t a joke. Hill was sitting on her bed and her roommate was next to her, working on a laptop at her desk. Across the room was Hill’s desk, where she always put her 40-ounce water bottle—pink and covered in stickers. When her roommate stood up, Hill asked her for the water bottle. Her roommate looked over at the desk, but it wasn’t there, where it had been seconds before.

Hill then saw her water bottle perched on top of her roommate’s laptop.

Since that day, they’ve had no ghost trickery, but Hill is still hoping for another visit.

Unofficial ghost tour guide and theatre professor Michael Curry has one more story to add to the collection, two if you count his offhand comment about an Egyptian mummy who was once stored under a table in the former Julia Rogers Library. Apparently, there was a lack of storage space, but Boris, the “Goucher Mummy,” eventually found a home at the Johns Hopkins Archeology Museum.

In more lively tales, Mildred Dunnock 1922, one of Goucher’s most successful actors and most notorious Goucher ghosts, is known to haunt the Mildred Dunnock Theatre in the Meyeroff Arts Center. “Students claimed that after she died, they would have these funny feelings or see out of the corner of their eye this small white figure. And then they would look, and it would be gone,” Curry says. 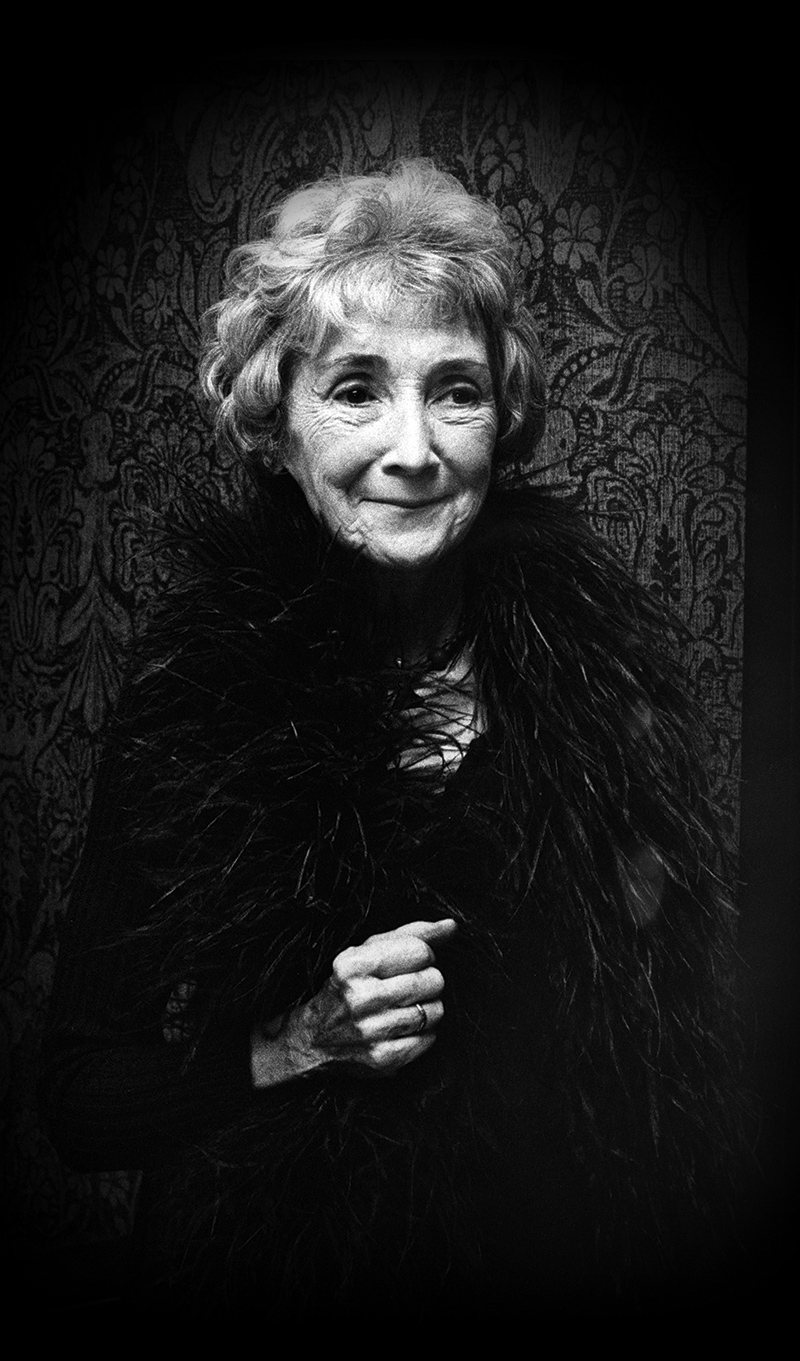 Curry had a personal experience one evening in the 1990s during his opening production of Hamlet. In the play, the soldiers have been seeing the ghost of Hamlet’s father, and just as they say, “Ah, it might appear again tonight!” all the lights in the theater went out. The only light left was the safety light, called a ghost light in theater terms, which is always on so the actors can move backstage. The actors were able to finish the scene, when “all of a sudden the lights came back on, and nobody could ever figure out why, so we attributed it to Mildred Dunnock, who wanted to let us know that if you’re looking for a ghost in the play, look no further—she’s right here,” Curry says. “I mostly think she didn’t like the production of Hamlet I did.”

Despite his experience with Dunnock, Curry doesn’t believe in ghosts, but he could be convinced, in part because as a child he swore he could hear his grandmother thumping up and down the stairs after she had died. If Dunnock wanted Curry to truly know it was her, and possibly help him believe, Curry says she should have piped in when Hamlet is thinking about his father, hears thumping on the floor, and says, “Be quiet, old spirit.”

“That would have been a good sign,” Curry says, maybe wishing she had.

“Mildred, if she is a ghost, is a great boon. She was always known as a sweet person and often in her career played vulnerable people who were put down, but she always had this resilience,” Curry says. “She would be a positive force as a ghost, I think.”

Maybe that’s why it’s become a tradition, before students leave the theater, to say: “Goodnight, Millie.”

“And evidently,” Curry adds, “that has appeased the ghost.”

(Photo at top): Goucher students in Julia Rogers Library in the 1950s.