In loco parentis and the Goucher handbook

The rules they are a-changin’

“It is not considered conducive to the discipline of the College or the development of character in the student to attempt to restrain improprieties of conduct by a system of slight penalties. Students will be courteously admonished of misdemeanors, and will be expected to correct their behavior at once; otherwise they will not be permitted to remain in the institution.” So begins the Woman’s College of Baltimore Regulations from 1891. The point was clear: You can follow the rules or you can leave.

The Woman’s College regulations were the first iteration of what is today the Goucher College campus handbook. How strident the early college administrators were in enforcing these rules is lost to time, but it’s not difficult to imagine the first generation of Goucher students were as prone to rebellion—as unrestrained in their improprieties—as later ones were.

The old rules were simple but a touch overbearing (the college was founded in 1885, but the oldest handbook on record is from 1891). Students’ wraps and overshoes were to be stored in their proper places. You could use any of the stairways, but, really, the south stairway is preferred. And do not use the “gymnasium apparatus” without special permission.

By the middle of the 20th century, however, the now-named Goucher College had  from downtown Baltimore to Towson and rapidly expanded. Expectations for women were changing, fashion was changing, and so, too, was the handbook.

Interestingly, the late-1950s handbook only explicitly states that students couldn’t wear slacks, jeans, or Bermudas in the dining room (except Wednesdays and Saturdays). In reality, it was enforced campus-wide and beyond: “Beware of Tone!” says the handbook. “Tone Committee, a branch of the Students’ Organization, keeps us aware of the need for careful dress and of the importance of the ‘correct thing.’ Think before you wear that ski-cap and those sneakers into one of Baltimore’s swankiest stores; Tone may be lurking nearby.”

The college clearly felt they needed to be more explicit by the early 1960s. The 1961-62 handbook states that skirts and dresses were required off-campus, and it lists where slacks, blue jeans, pedal-pushers, and even kilts were allowed: the library, Wednesdays and Saturdays in the dining room, and as needed in certain class settings. The college also felt the need to add, “Short shorts may be worn only to and from sport activities.”

By the time of the women’s liberation movement in the late 1960s, the clothing rules seemed even more intolerable to the students. “The section on ‘Personal Attire’ always brought a smile to my face, and maybe more recently an eye roll,” says Beth Kilss ’70, referring to the rules from her first year in 1966 that were pretty much the same as those in the 1961 handbook.

“Some students pushed the envelope by wearing blue jean skirts with T-shirts and bedroom slippers on their feet,” says Lucy Hedrick ’69.

That finally changed in 1969. The handbook for that year said, “Anything from skirts and sweaters to simple dresses to slacks are worn to classes.” Tacked on was a reminder to bring a few cocktail dresses for dances with Johns Hopkins and the Naval Academy. 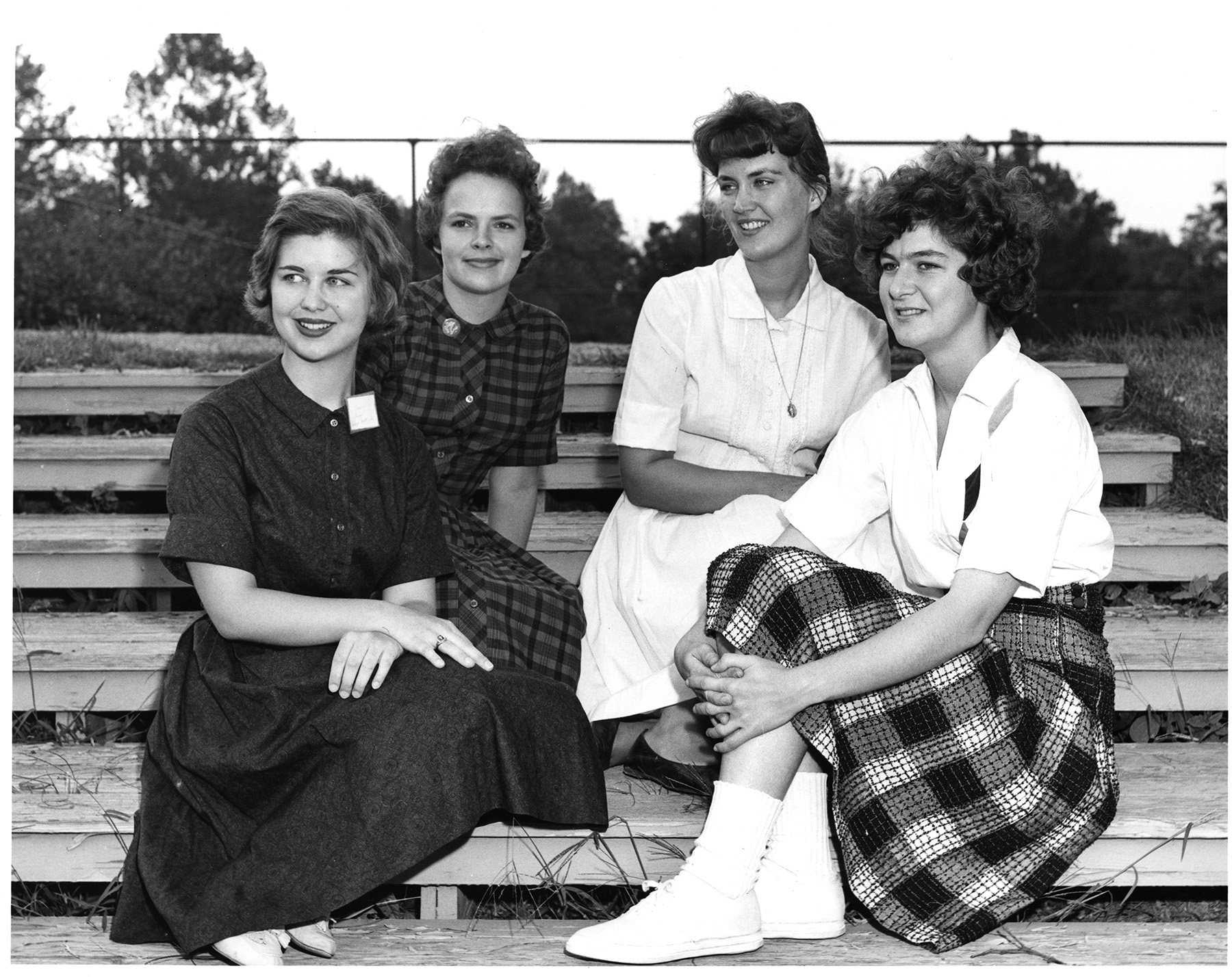 Goucher students in 1965, photo by Sussman-Ochs 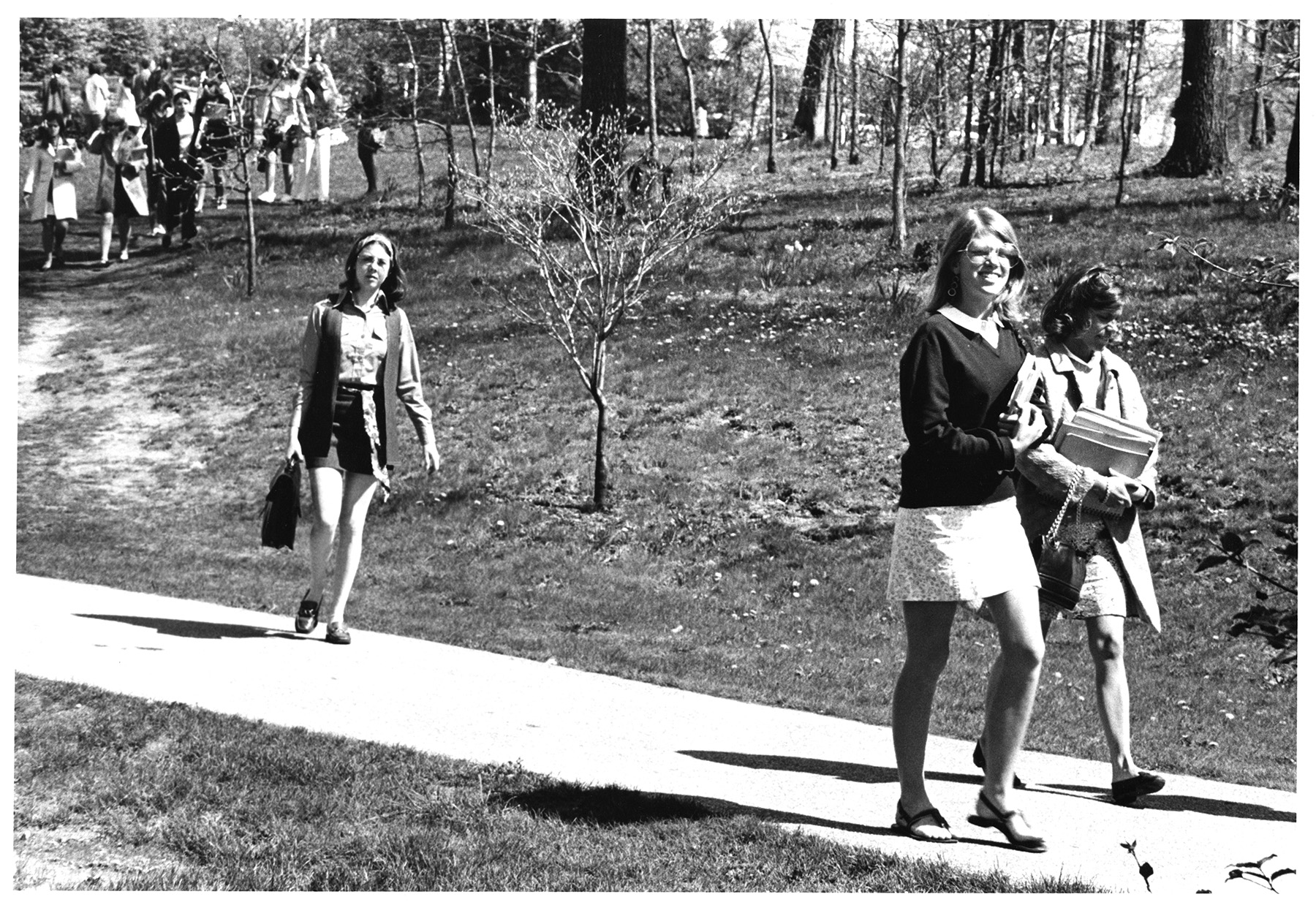 Goucher students in 1969; as convention around fashion for women eased in the 1960s, the Goucher handbook became stricter, before finally relenting.

There were unwritten regulations that chafed, as well, particularly for food and drink.

“There were rules about how many chocolate chip cookies and how much bacon you could have,” Kathy Jacob ’72 says. But, “all bets were off if you were a dishwasher, like me.”

And there were rules against drinking on campus. Thus came about the “magic circle,” a concept many alumnae who were there at the time still look back on fondly. “It was said that if you took a six-pack outside of the drive that encircled the campus, authorities would turn a blind eye,” says Jacob.

Many students from before the days of the personal computer also remember rules around typing, although none could be found officially in the handbook.

“You were not allowed to type in your room as the old typewriters made too much noise. You had to lug your machine up to the upstairs lounge and remain there until you were finished,” says Sylvia Foster ’62.

Jacob adds, “There was no typing—on real typewriters with real, noisy, keyboards—after 10 p.m. But you could carry your typewriter down to the TV room.”

However, the women were expected to make a lot of noise on one occasion—when a man was visiting. Says Whitehurst, “Between 2 and 4 p.m. on Sundays you could have a guy visit your room, with the door open, after announcing, ‘Man on the hall!’” she says.

“The door had to be open two fingers worth,” remembers Isabel Strasser ’64.

“You had to yell ‘Man on the hall’ so no one came out of the bathroom in their underwear,” Jacob explains. But, she says, “some didn’t care and did it anyway.”

There was another way you could entertain a man in the dorms. “Froelicher had two date parlors in the lobby,” she says. “You could reserve a parlor for an hour and go in there and ‘date.’ My daughters find this whole idea absolutely hilarious.”

Many Goucher women of the ’60s and ’70s vividly remember the rules about leaving campus. “As young women, we were still considered vulnerable creatures who needed to be protected,” says Edie Coleman ’65, “a holdover from the Victorian Age, I guess.”

In loco parentis, or “in the place of a parent,” was the term for the policy at women’s colleges at the time to manage their students’ personal lives to an overbearing degree. Students had to be in the dorms by 10 p.m. “If we were late,” says Whitehurst, “we could be ‘campused,’ meaning we could not leave the campus for a certain length of time.” Students always had to sign out before leaving campus, writing down where they were going, with whom, why, and when they would return.

Coleman recalls having to go to the student judicial board for staying out overnight, by mistake, after having too much to drink with her future husband and falling asleep. Only a few years before that, students were being expelled for similar infractions.

Jacob, who graduated in 1972, was at Goucher at the right time to see tremendous change. “So much of the ritual of freshmen year was gone by graduation,” she says. “In loco parentis pretty much died during those years.”

(Photo at top): A Goucher dorm room in the 1960s; all photos courtesy of Goucher College Archives