The 1918 flu pandemic, caused by the H1N1 virus and commonly called Spanish Influenza—although it may have originated in Kansas—spread worldwide with help from World War I soldiers. The first U.S. cases were reported in March of 1918. In October, 200,000 Americans would die; by the end of the pandemic, the American death toll would reach approximately 675,000. There were two additional surges of the H1N1 virus, and historians believe it was not eradicated until February 1919.

“In view of the extent and severity of the epidemic, it was considered fortunate that the number of deaths did not exceed two [on Goucher’s campus],” wrote Anna Heubeck Knipp and Thomas Thaddeus in The History of Goucher College, published in 1938. It’s unclear who were the people who died—student, employee, or possibly civilian.

The H1N1 virus and COVID-19 virus spread quite differently, said Carrie Beth Ent, former director of the Student Health Center and nurse practitioner. People infected with the H1N1 virus showed symptoms almost 100% of the time, she said. It was uncommon for people to be asymptomatic, unlike people infected with the coronavirus who might show mild or no symptoms, Ent said. The incubation periods are different too, because influenza was infectious for the first five days, while the coronavirus could be contagious for up to two weeks, possibly longer. 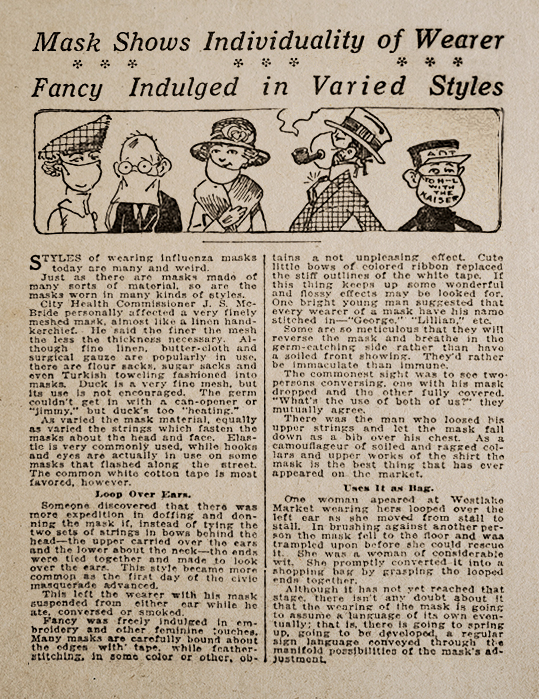 The methods for controlling the Spanish flu and coronavirus, however, are quite similar. In 1918, with little known about the influenza and no vaccine, the only solution was to quarantine, maintain personal hygiene, and wear a mask. Posters depicting a devil made of spit warned people to keep their germs to themselves, and a cartoon in the Goucher College Weekly depicts students wearing masks. In many U.S. cities, people were told to stay home and avoid crowded streetcars. Businesses, movie theaters, and schools closed temporarily. “Those seen without masks were publicly shamed for being ‘Mask Slackers,’” said Emily Rines ’17, who started researching the 1918 flu during her quarantine.

Goucher closed October 9, 1918, and remained closed for four weeks, a shockingly short time compared with 2020’s physical closure. When Goucher made the decision to close the campus in March 2020, not everyone was able to go home, and no one knew if they would be returning to campus. As a result, a fluctuating number of students stayed on campus through the summer. For the fall semester, 45 students applied to live on campus in individual suites in Welsh Hall. “Housing is such a basic need, so I’m proud that Goucher was able to adapt to an online community while still offering housing to the students for whom campus is the best option for their learning,” said Lindy Bobbitt, director of residential life.

Goucher acted proactively, for students’ physical health as well as their mental and social health. Given that students were in isolated spaces where they had what they needed to never leave their rooms, Residen­tial Life had to rethink ways to connect, Bobbitt said. Compared with other semesters, this past fall Residen­tial Life staff checked in with students much more frequently through email and Zoom. Each residential assistant only had four to six students, so the expecta­tion was that they would know their residents very well, Bobbitt said.

Eva Bulson-Lewis ’21 said her job as an RA shifted during the fall semester. “I [was] playing the role of social matchmaker by trying to get residents out of their rooms and trying to get them to interact with their home-mates more than I normally would,” she said.

Activities such as “show and tell” via Zoom were very popular, as were social distanced mask tie-dyeing and ice cream socials, Bobbitt said. For people intimidated by in-person gatherings, even before the pandemic, these low-stakes social events provided a greater opportunity for them to participate, Bobbitt added. On Zoom calls, students didn’t have to show their faces, and they could listen to the conversation without feeling obligated to talk. For some, that was ideal. Bobbitt also recognized that others needed more social stimulation, and figuring out how to best meet those needs was an ongoing process, one that will inform how Residential Life do things after COVID-19.

In a conversation in the fall, Bulson-Lewis said she had been crabby. “It’s probably because I just haven’t seen anybody,” she said at the time. “Talking to people is definitely something I need to work on. I like my residents and my co-RAs, but my close friends aren’t here. There’s an extra layer of isolation.”

Bulson-Lewis knew she should do certain things to help with her mental health, but putting them into practice was difficult. Because all of her classes were online, she spent most of her time in her room, even meals, which she brought back from the dining hall. Going outside more often and exploring Goucher’s woods certainly helped, as did being more intentional with her time. It was easy to spend all day scrolling on Instagram, putting off her homework, and seeing nobody for the entire day, she said, which is why it was essential to create a schedule with time slots for exercise, homework, and talking with people. As Bulson-Lewis also noted, people fully embraced a self-improvement model at the beginning of the pandemic, although the social media pressure to do so was possibly unhealthy. In any case, self-care is harder to do now. “I just think it’s super important to not let this time slide by,” she said, “because it does slide by if you don’t take the reins.” 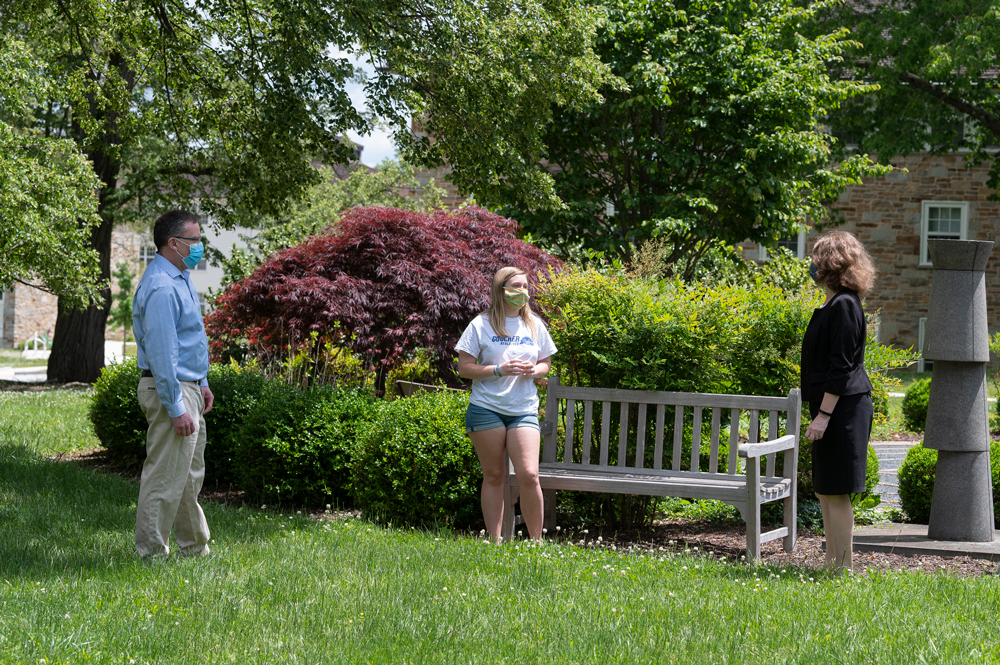 A student meets with faculty outside

When it came to students’ physical safety, compliance to Goucher’s social distancing and masking protocols was important. “When you have groups this small, and when you know that everyone who is on campus has a reason to be there, compliance really is not an issue. We had very few problems in the spring for the same reason,” Bobbitt said. “I think these are students who aren’t really willing to take risks that would jeopardize their housing.”

Even though many of the physical spaces have been altered—such as blocked off common spaces— others remained the same. The kitchen in Welsh, for instance, was available for students as long as they sterilized everything after use. Being limited to so few amenities meant that students valued what they had and took responsibility for their actions, Bobbitt said. In a typical semester, it’s difficult to get students to keep common areas clean.

At Goucher in 1918, there were also students on campus; however, it looked quite a bit different. The fifth-floor infirmary of Fensal Hall at Old Goucher was expanded to almost the entire building, and leading the operation was Professor Lilian Welsh. She worked as a medical doctor before coming to Goucher to teach anatomy, physiology, hygiene, and physical training.

As Rines researched the earlier pandemic, she learned that “Dr. Welsh was actually the person you want to have in your college when this was happening because she had a history of treating infectious diseases.” Welsh also served on the tuberculosis committee and the Vice Commission, specifically focusing on stopping the spread of venereal disease.

In Goucher’s makeshift infirmary, Welsh was aided by volunteer nurses and physicians, most notably Dr. Mary Sherwood, Dr. Mabel Belt 1910, and a consultant from Johns Hopkins, according to The History of Goucher College. Eventually, Welsh made it possible to pay the volunteers by charging patients $3 per day, when students did not usually have to pay anything for medical care.

In addition to volunteers from Baltimore’s hospitals, students and professors assisted the nurses while wearing masks. Although most students had been sent home, there were three shifts of students each day who served food to patients, took their temperatures, and delivered messages. Authors Heubeck Knipp and Thaddeus recorded nurse Elizabeth Browne saying, “I honestly don’t know what we could have done without [the students], and the efficiency of the system, which was organized by Katherine Manning, president of the Student Organiza­tion, would make the Kaiser weep with envy.”

One hundred years later, and Goucher—along with the rest of the world—is using best practices to navigate a pandemic. “This year is going to be memorable,” said Bobbitt. “We just don’t know how yet. This is still an experiment for everyone. We’re going to look back and ask, ‘What did we learn?’”

At press time, Goucher had decided to keep the campus closed for the first half of the Spring 2021 semester. On February 12, the Spring Reopening Taskforce announced that as long as public health data benchmarks continue to be met, the college will invite a portion of students to return for the last seven weeks of the semester. The college intends to fully open for the fall semester, and a student-led informational and safety campaign is also in the works.