By Natalie Eastwood and Molly Englund 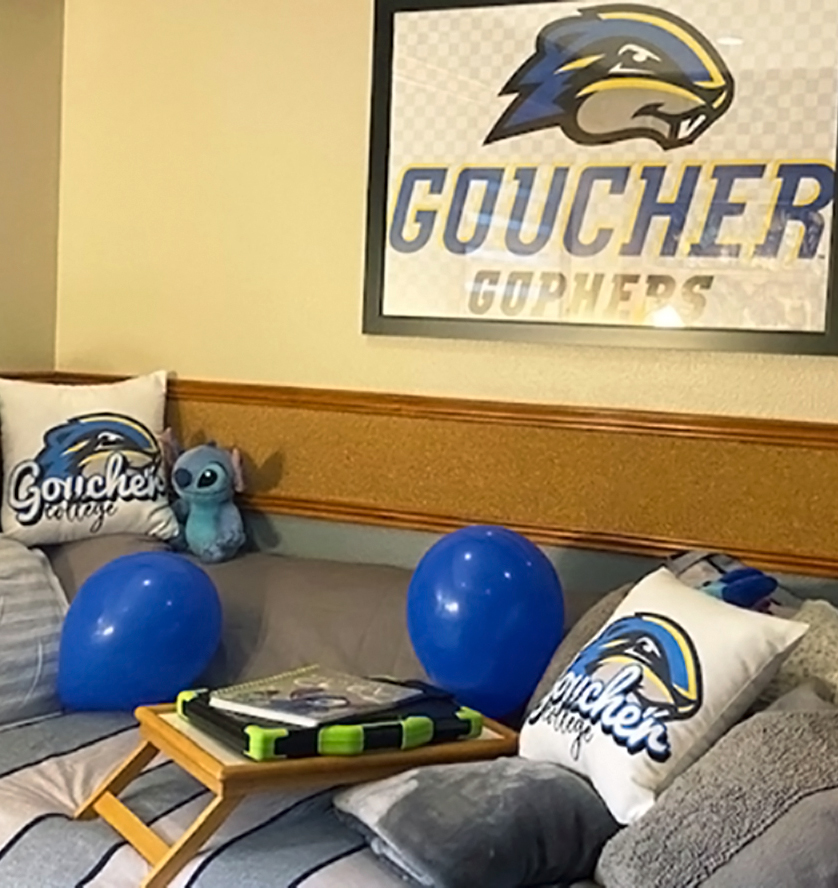 Go into the room of Chapin Noel ’24, and you might think you’re at Goucher—a blue and yellow banner hangs on the door, a giant gopher stands guard, and pillows make for Goucher-themed accents. Noel’s parents surprised him by decorating his bedroom with Goucher swag. College from home certainly wasn’t his first choice, but having reminders of Goucher helps, he says. All of his classes are live through Zoom, which means that he doesn’t have to rush to class when he wakes up late. When it’s safe to return to campus, Noel, like many others, is excited to meet with his friends. 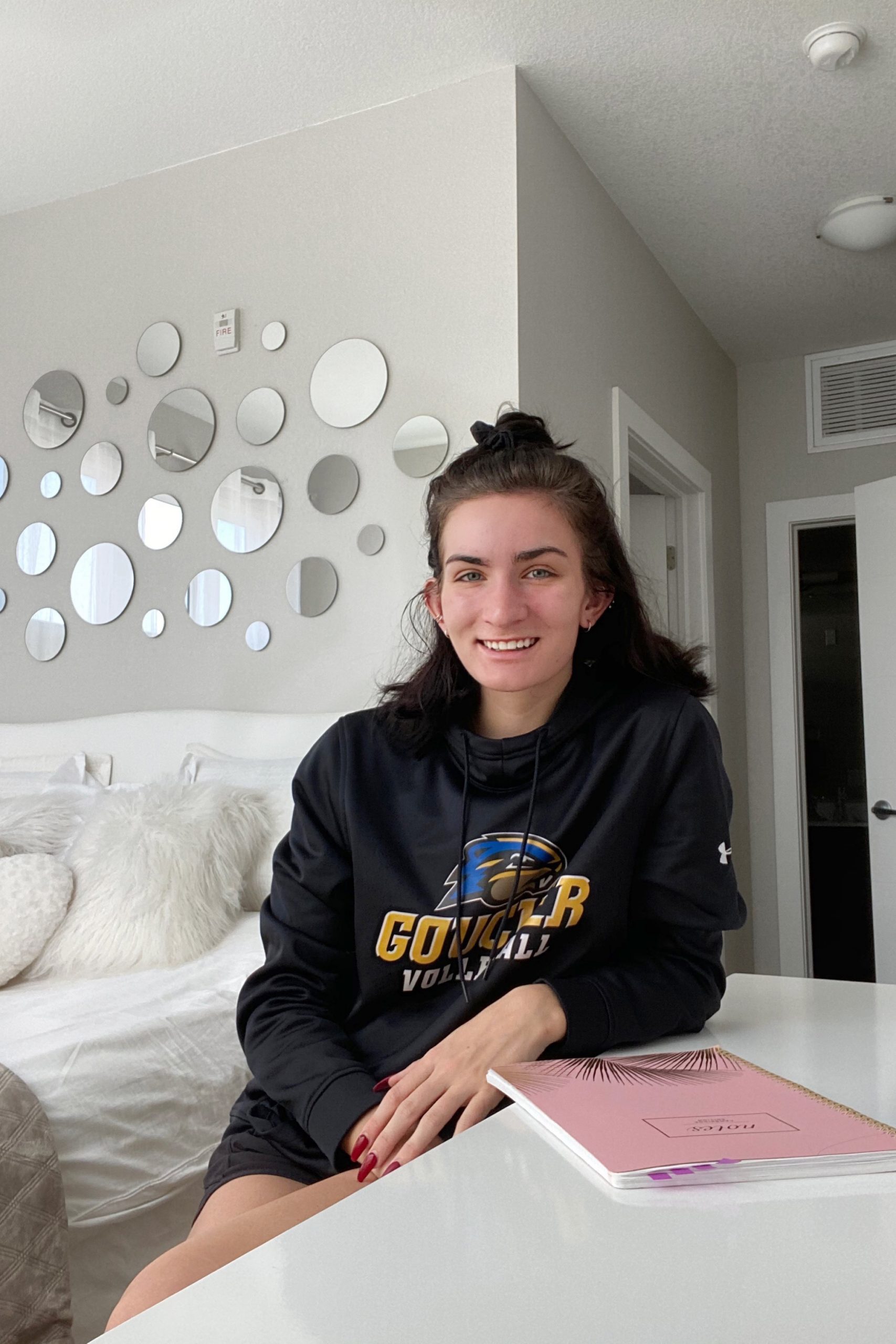 Paige McSavaney ’24 is the only one of her high school friends who is going to college virtually. She rented an apartment in Boulder, CO, not too far from her childhood home so her dog and parents wouldn’t distract her during her first college semester. McSavaney has settled into a routine; she starts every day with a bagel with berry cream cheese and a vanilla latte before her Eastern Time Zone classes start—and she’s happy to say she’s now become a morning person. McSavaney has been playing the online multiplayer game “Among Us” with her volleyball teammates, which helps her feel like part of the Goucher community. 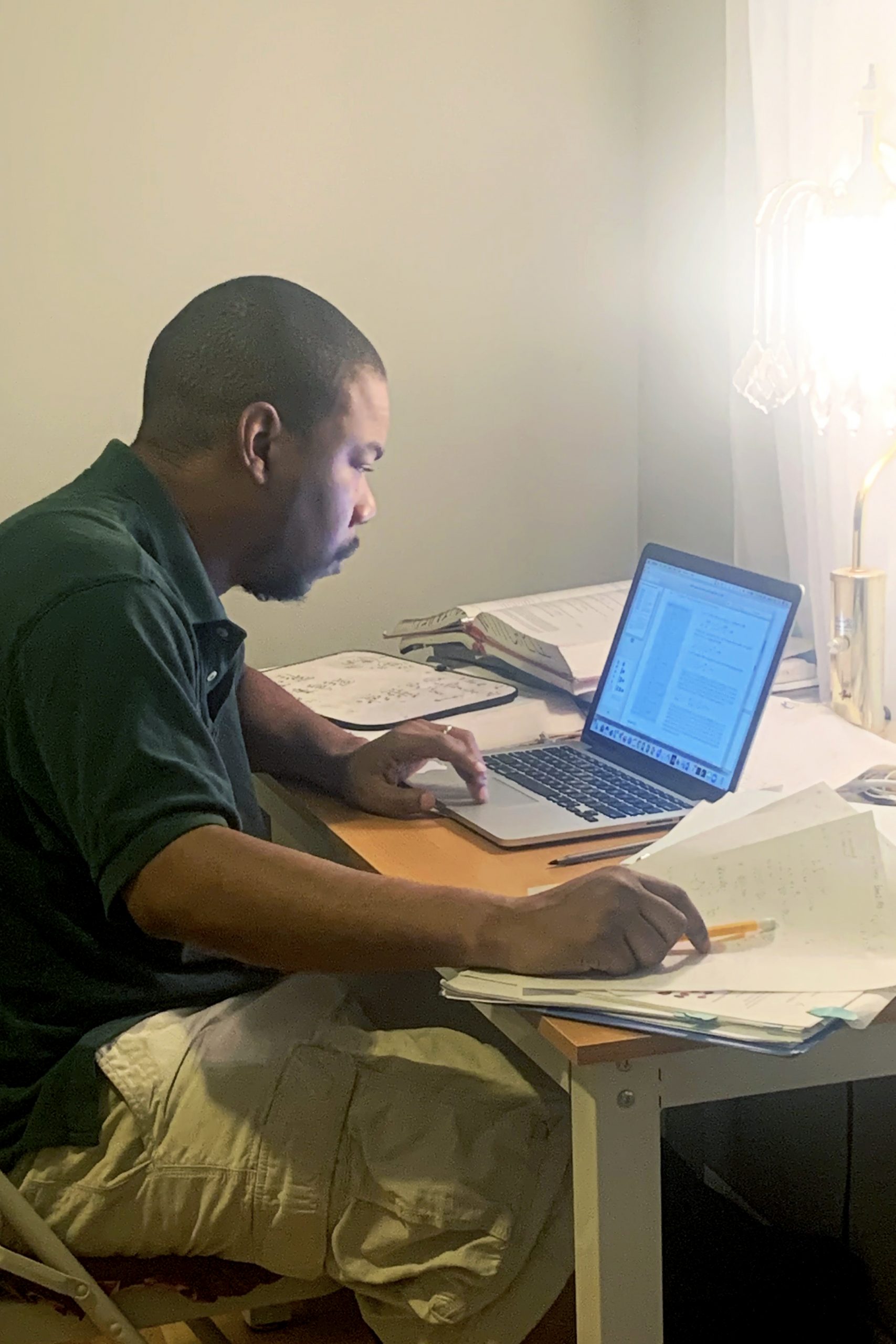 Assistant Professor Jaired Tate is teaching two chemistry classes this semester, a 100-level and a 400-level course. Tate co-teaches the intro course with faculty members George Greco and Lisa Gulian. Their teaching team went to campus at the start of the semester to prerecord labs for the students. It’s a flipped classroom setting, so the students watch the lectures before class, and then solve problems and learn how to process the material once they’re together. Tate says that teaching over Zoom is a fine balance between engaging the students and not overwhelming them. He finds comfort in knowing we’re all trying to figure out how to live and work best in this moment. 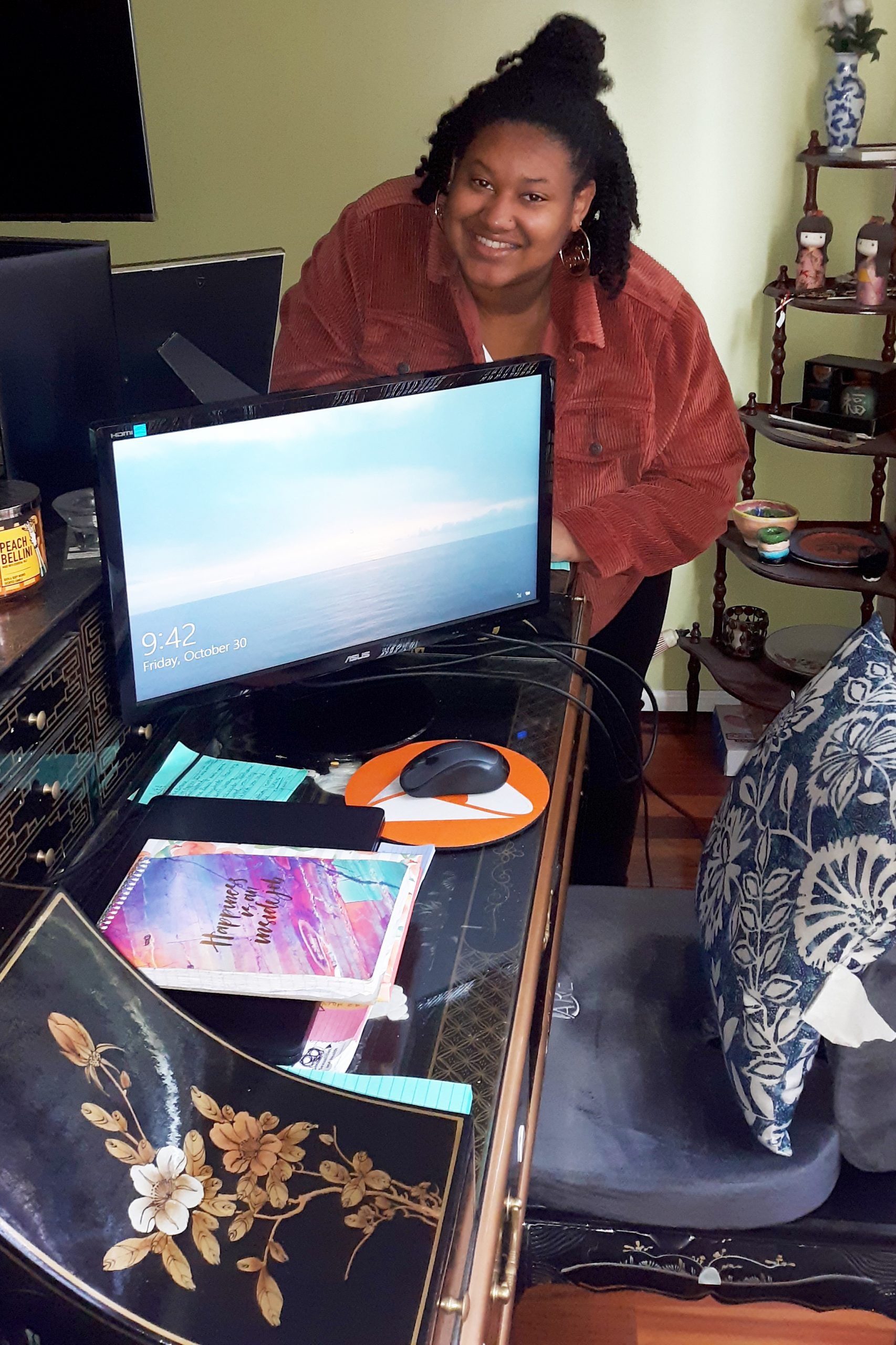 Kendyl Walker set up her desk in her living room, near the best window in the house. That works well until direct sunlight hits it—then she has to adjust her webcam. The pre-major academic advisor meets with students to assist their transitions to college; she sends them resources and helps them figure out their goals. Walker has created a routine to help her work from home. She reads a little before the day starts, and cooks something quick for lunch while watching segments from Last Week Tonight with John Oliver. She also listens to music while she writes advising notes, but it doesn’t make up for the way she misses seeing everyone walking down Van Meter Highway. 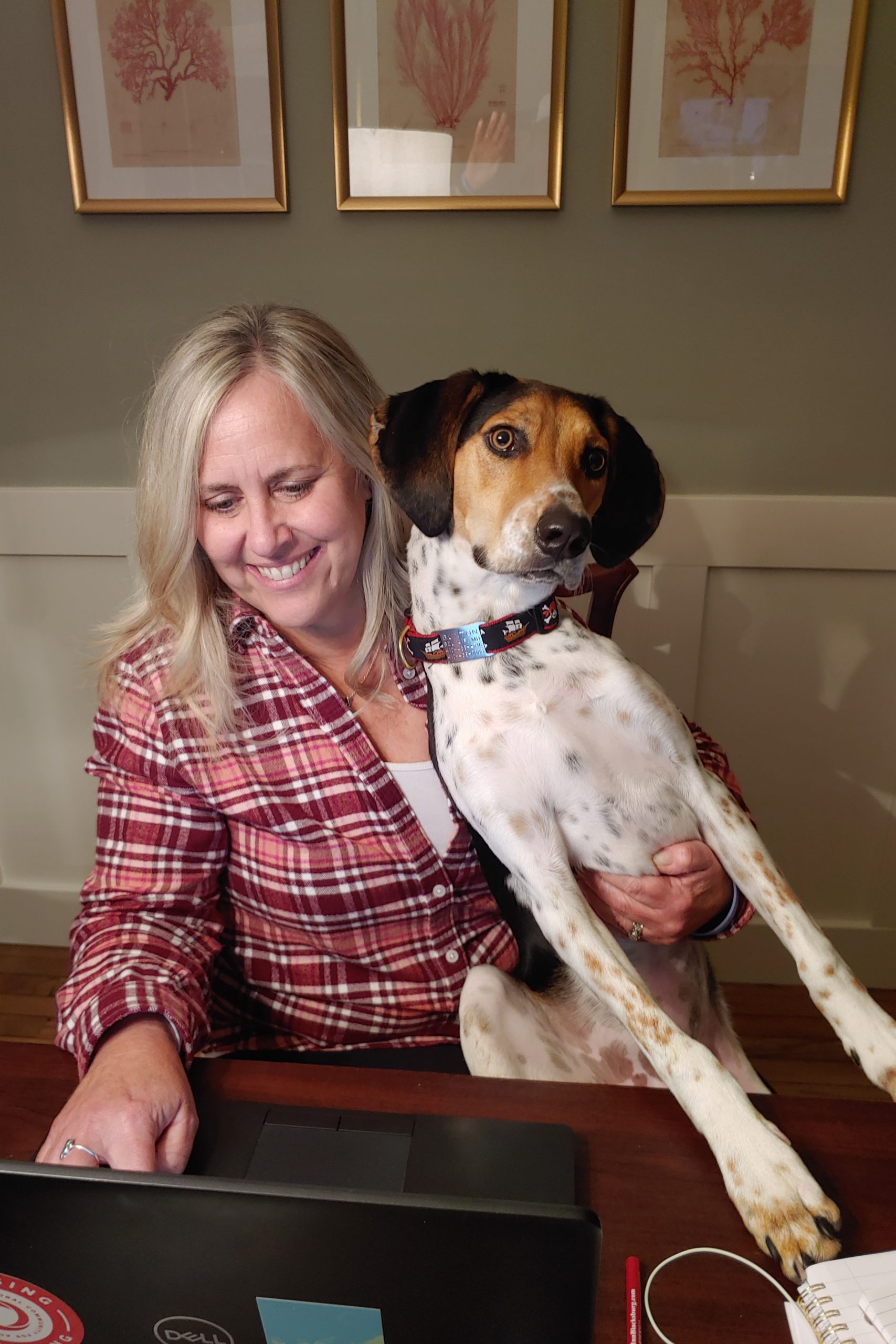 Like Walker, Tina Caretti is a pre-major academic advisor. Her workdays can be unpredictable, so she has a number of tricks to keep her grounded. Namely: coffee and a puppy. Caretti and her husband adopted Buxton, now 10 months old, from a rescue organization in April, and he has a lot of energy to burn off. It’s been nice to have an excuse to get outside for a bit; Caretti works from her deck whenever it’s warm enough. Walking in her neighborhood more has shown her there are new people to meet and amazing things to see. But for a quick pick-me-up, nothing helps quite like texting a friend.