At the end of the 19th century, when Goucher was the Woman’s College of Baltimore City, it had amassed, in its less-than-15-year existence, a “universal museum”—universal meaning encyclopedic: Its holdings included natural history, artifacts, art, and curiosities representative of different eras and world cultures. At its peak, this vast collection, used for hands-on learning, comprised more than 100,000 pieces.

But in 1914, due to changes in pedagogical approaches, among other reasons, the Woman’s College Museum started to be dismantled. Its cuneiform tablets were “permanently loaned” to Yale University, some of the Egyptian collection was given to the Walters Art Museum, the Lee Mineral Collection was sent to Western Maryland (now McDaniel) College, and other pieces landed elsewhere—some even in the trash.

In 1954, when Goucher moved to Towson, what remained of the collection was boxed up and put in storage—with the exception of many natural history specimens that are on display in the natural science wing in the basement of Hoffberger. Even still, the scope of what remains is, according to Professor April Oettinger, “extraordinary.”

So extraordinary that, in 2019, Oettinger and her colleagues launched a new major with the collection at its center. Oettinger, who was recently named the Barbara Beacham Cushing ’51 Distinguished Professor of the Humanities, chairs the new Visual & Material Culture (VMC) Program.

Last spring, to develop opportunities available because of the “lost museum,” Oettinger and her colleagues secured a $150,000 grant from the National Endowment for the Humanities (NEH). This is the first NEH grant Goucher has received in 20 years, and the school is one of only five colleges or universities awarded it. Among other initiatives, the innovative grant provides funding to create the Collaborative Humanities Laboratory—a physical and virtual space where students across disciplines can gather, curate, produce, and present original scholarship centered on images, objects, and artifacts.

Associate Professor of Mathematics Phong Le ’03 will bring students to a makerspace/workspace where students can work with pieces from the collection and fabricate “ghost objects” and props that will complement student-curated exhibitions. The grant also provides for a digital humanities technician to support student-designed online exhibitions. The physical humanities lab, makerspace, and digital humanities lab will help students build skills in research, critical analysis, cataloging, web presentation, and storytelling through exhibition—skills that will serve them well after Goucher.

In thinking about how the collection can be used for hands-on learning, Oettinger says she “can see so many paths students can follow,” her enthusiasm as contagious as it is palpable. “We envision infinite numbers of projects … cataloging the objects, creating access to them digitally, thinking about display as an agent of storytelling, writing—students need to be able to write introductory statements and proposals. Every student at Goucher has to take two Complex Problems Exploration courses, so I’ve developed one called Inventing Nature based on an interdisciplinary focus exhibition drawn from the natural history collection.”

“Curriculum has been, and continues to be, built around the collection,” says Curator and Director of Exhibitions Alex Ebstein ’07. Ebstein returned to Goucher in 2018, just before the VMC major launched, to be the collection’s content curator. One outcome of the curriculum is a smart, artfully displayed, aesthetically pleasing, collaborative exhibition.

Rediscovering Goucher’s Lost Museum, featuring a sampling of the collection, opened in Silber Gallery in September 2021. It highlights Goucher’s exceptional hands-on curriculum as well as its commitment to academic excellence. On display are fossils, photographs, insects from around the globe, plaster cycad (seed plant) reproductions, (literal) drawers of minerals, amulets from Egypt, a Native American chair with carved totem-like arms, clay figures from 1000-300 B.C.E. Mexico, Roman ceramic oil lamps, a collection of lantern slides, the mount of a 12-point buck and smaller taxidermy mounts, and so much more. 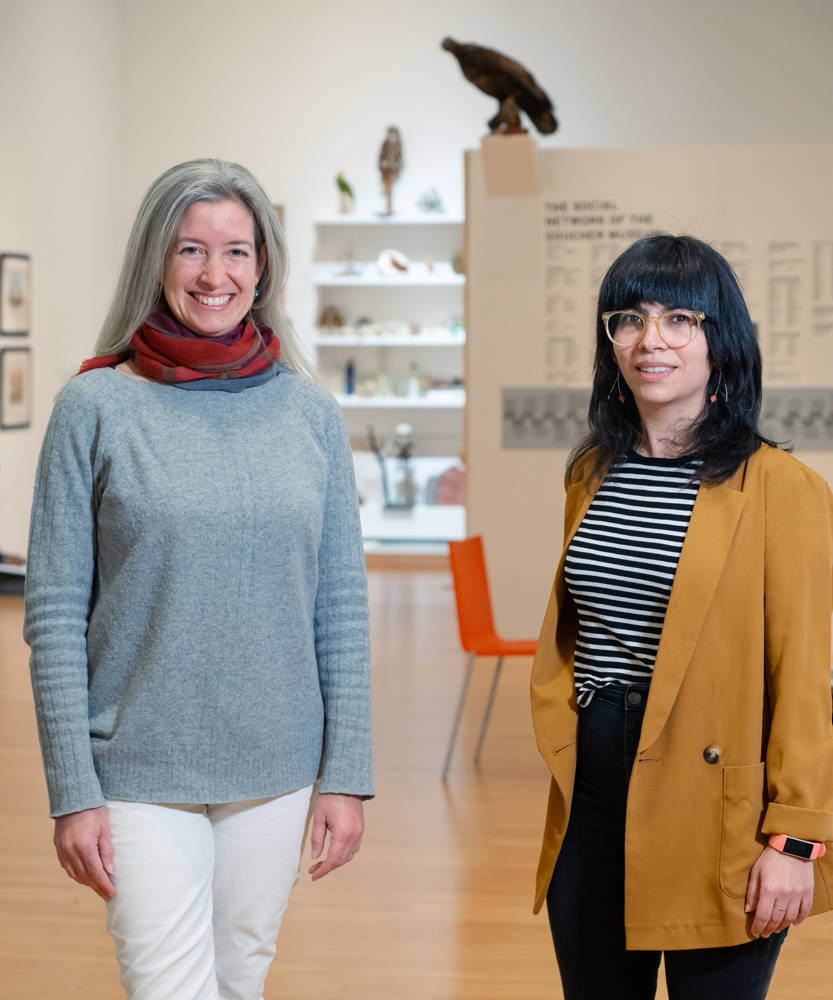 Students helped design, curate, and build the exhibition in internships and courses taught over a couple semesters by Ebstein, Oettinger, and Assistant VMC Professor Tina Sheller, who focuses on historic preservation and public history. Spring 2021 Unobskey Visiting Artist Mark Dion, an internationally recognized conceptual artist best known for his use of scientific presentations in his installations, provided consultation. He was so intrigued, he returned in the summer.

For the student curators, the exhibition experience was invaluable. Austen Caudill ’21, a visual and material culture major with a minor in historic preservation, photographed hundreds of the artifacts. “I was surprised by how much trust the professors and staff placed in me,” he says. Unaware of Goucher’s collection, he says, “I never thought I’d be handling artifacts as an undergrad.” His photographs will be accessible to users of the Collaborative Humanities Lab.

Senior VMC major Oona McKay ’22 participated in some of the informal exhibition. Last summer, they took the Practicum in Visual and Material Culture, which focused on the practical and narrative aspects of exhibition design. McKay also had a summer fellowship in Goucher Library’s Special Collections cataloging and digitizing the series of lantern slides in the exhibition. McKay says their involvement has elevated their experience at Goucher: “I think the VMC department’s interest in getting undergraduate students involved in this project and finding opportunities for us to get hands-on experience with art and artifacts is a big part of why I’m glad I chose [to go here].”

One piece in Lost Museum is 20 black cutout silhouettes of Native American pottery pieces by junior VMC major Heather Parkin ’23. Parkin took Ebstein’s Exhibition Design class and says she “designed the section on Native American artifacts being repatriated under the 1990 Native American Graves Protection and Repatriation Act.” Parkin also took The Goucher Museum: Past and Present course in which the class transcribed the catalog of items in the Woman’s College Museum during its heyday, read about the history of museums and best practices, and traced the origin of the college’s museum items.

Parkin also did some of the physical labor on the exhibition, “mainly helping construct temporary walls and painting shelves,” she says. “It allowed me practical experience in my chosen field, just like an internship. However, it was more meaningful because I was a part of the process from the beginning, and my input felt just as respected as any other member of the team’s.”

The curators didn’t overlook the opportunity to examine the artifacts with 21st-century consciousness. The exhibit also featured three works by contemporary artists. While interesting enough as stand-alone pieces, in the context of the exhibition, they respond to and provide critique of the original collection, adding another level of analysis that invites viewers to consider the ethics of collecting, owning, and exhibiting other cultures’ art and artifacts. 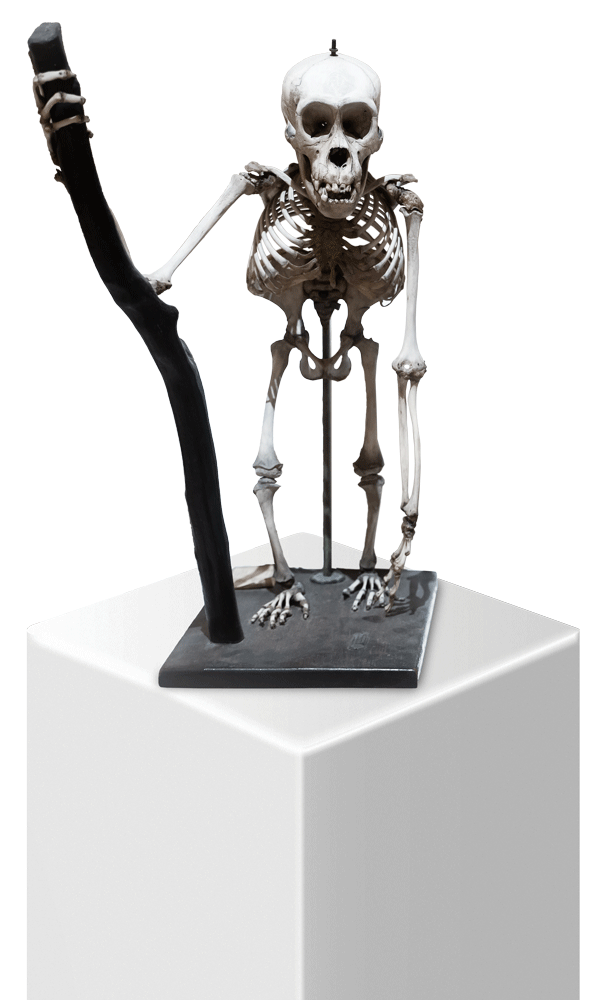 Baltimore-based artist Jackie Milad, who is both Honduran and Egyptian, has two works in the exhibition that push back against “the constant appropriation of Egyptian imagery and iconography,” says Ebstein.

Of having her works included in the exhibition, Milad says, “The kind of artwork that gets me excited prompts conversation and even debate—never giving away all the answers. I love the idea of students walking away from my own artwork with loads of questions and ready to learn more about modern Egypt and its dispersed ancient heritage.”

After John James Audubon is artist Kaitlin Murphy’s deceptively beautiful and beautifully deceptive piece addressing the lack of credit or acknowledgment given Audubon’s artist assistant. Her work draws parallels to field research conducted in the early days of the Woman’s College.

When reflecting on her piece, Murphy says, “Knowing that the exhibition was a collaboration with other departments, I wanted it to be alluring and accessible to students and viewers who may not have an extensive background in art history but also have deeper layers for anyone who might have access to those references. … I hope it encourages students to be curious about the stories behind material objects in institutional collections, especially the stories behind the stories we’re all familiar with.”

Katie Wolfe’s piece is made of 37 3D-printed scans of classical sculptures and teaching aids. “Wolfe’s work illustrates the precariousness of institutional collections and their reliance on limited members of the faculty to incorporate them into learning. Goucher’s classical sculptures, documented in their downtown campus and images of art classes, did not make the trip to the county campus, and there is no record of where they went,” according to Ebstein.

“There were plaster sculptures of previous students’ works of art, guides to the ear and other complicated anatomical parts to sculpt, and maquettes [sculptor’s sketches] that showed how to use armatures,” says Wolfe. “I came across 3D scanning and printing as a way of trying to preserve these aids for students to use in the future, as they are in danger of being thrown out.”

“Part of what made Rediscovering Goucher’s Lost Museum possible is an amazing team of people who have all come together at this perfect moment,” says Oettinger. She makes clear the collaborative nature of such an undertaking.

This stellar alignment, though, is far less about chance and far more about the combined vision, genius, and grit of a team of dedicated people.

It’s rare that the stars align. But Rediscovering Goucher’s Lost Museum proves they do—and to such great effect that their light will go on shining long after the exhibition ends. 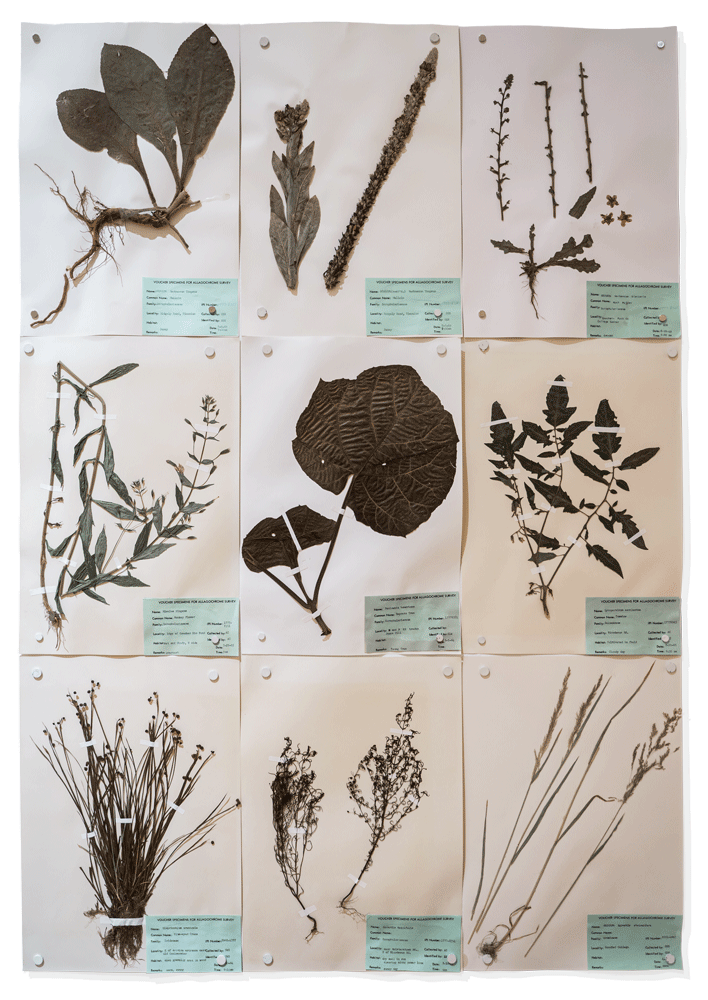 Plants collected from Goucher’s campus in 1965 and preserved in a science building filing cabinet, an exhibit stand-in for the Women’s College Museum’s lost herbarium