A partial history of Burning Man, through the eyes of its CEO:
founder, lover, and Goucher alumna Marian Goodell ’84

He wore a Stetson, a cowboy hat, distinctive even from a distance. The model was the Open Road, the color silverbelly, a pale off-white. The Open Road has what is known as a cattleman crown, a center crease with two sloping dents on either side. The brim turns up ever so slightly, with a bound edge. The hat has long been associated with Lyndon B. Johnson, the 36th president and the second from Texas. But this Stetson sat on the head of Larry Harvey, the founder of Burning Man. 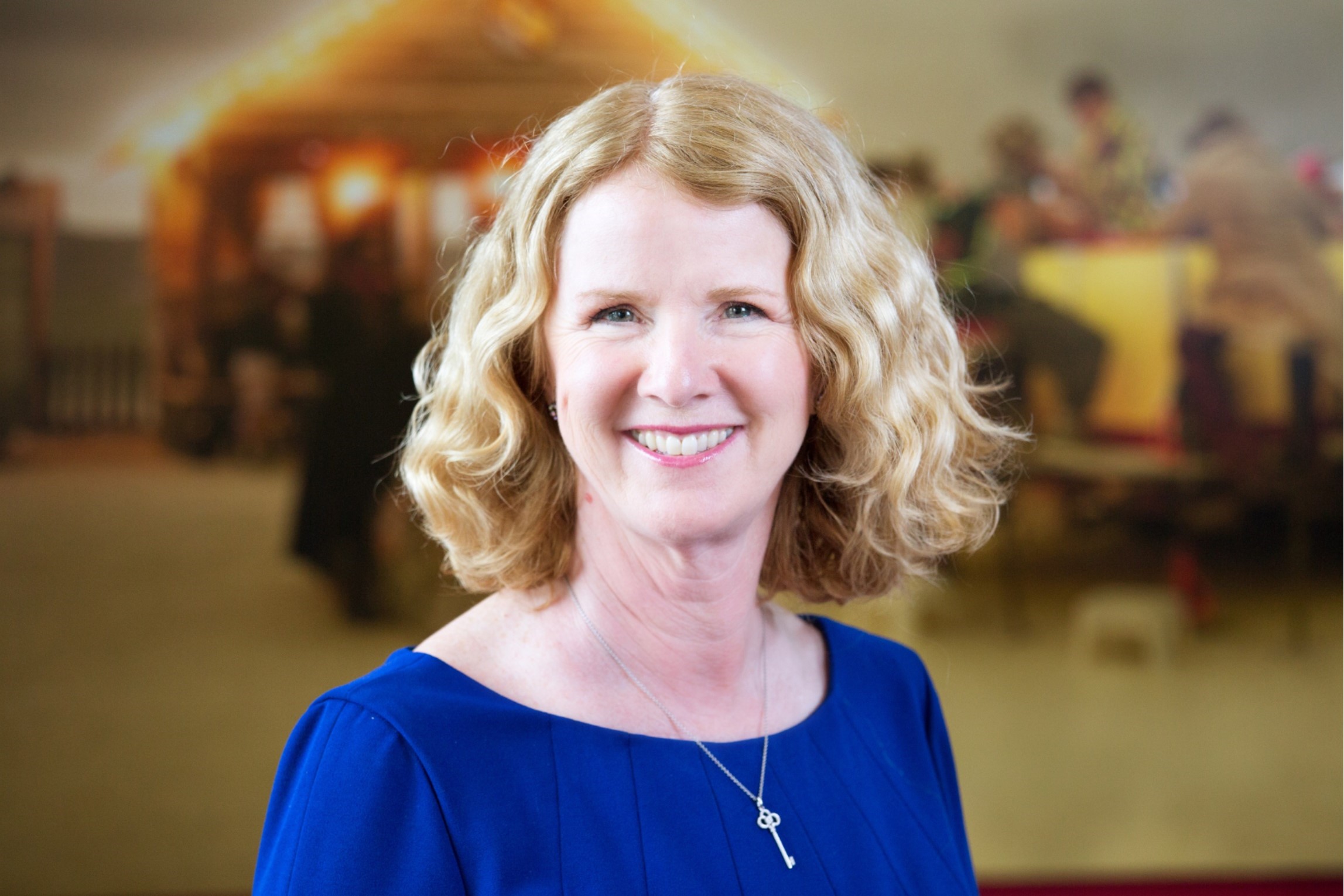 It was 1996, and Marian Goodell ’84 was at the festival for the second time. The annual gathering had existed for only a decade—the first one was just a “beach burn” in San Francisco in 1986, where Harvey and his friends built a wooden man to set on fire as part of a summer solstice tradition. The burn was a success, and the people were awed, so Harvey kept the ritual going the next year. Eventually, it grew large enough—about 80 people—that in 1991 the group of friends moved it to Nevada’s Black Rock Desert, and Black Rock City, the name of the temporary town that Burning Man swells into, was born.

Over the years, the festival would turn into a business, and then a nonprofit, adopting 10 principles and eventually hiring a CEO. The founders would strive to stay true to the ethos of the first burn even as the event became a global phenomenon, with 70,000 people attending in 2018. Today, Burning Man is a weeklong undertaking in service of art and community. In late summer, the “Burners” descend on the desert, spreading out and making camp in a great semi-circle, an organized chaos. Art cars, theme camps, and great towers of flames are central to the experience. Nothing is for sale; no one networks. It’s a place to explore who you might be and discover what you can do when you are forced to manage your own waste, deal with the oppressive sun and punishing dust, and rely on your neighbors.

Which is why some were surprised when, in the spring of 2019, the organizers announced changes they hoped, perhaps counterintuitively, would make people less likely to come. Burning Man was in danger of becoming a victim of its own success—and Goodell wasn’t going to let that happen.

Back in 1995, when Goodell attended for the first time, the event brought out about 4,000 people. She had fun in the desert but went back to her life when it ended. The next year, though, a feeling tugged at her: She wanted to do more. “I made it my business to figure out who the organizers were and introduce myself to Larry,” she said. 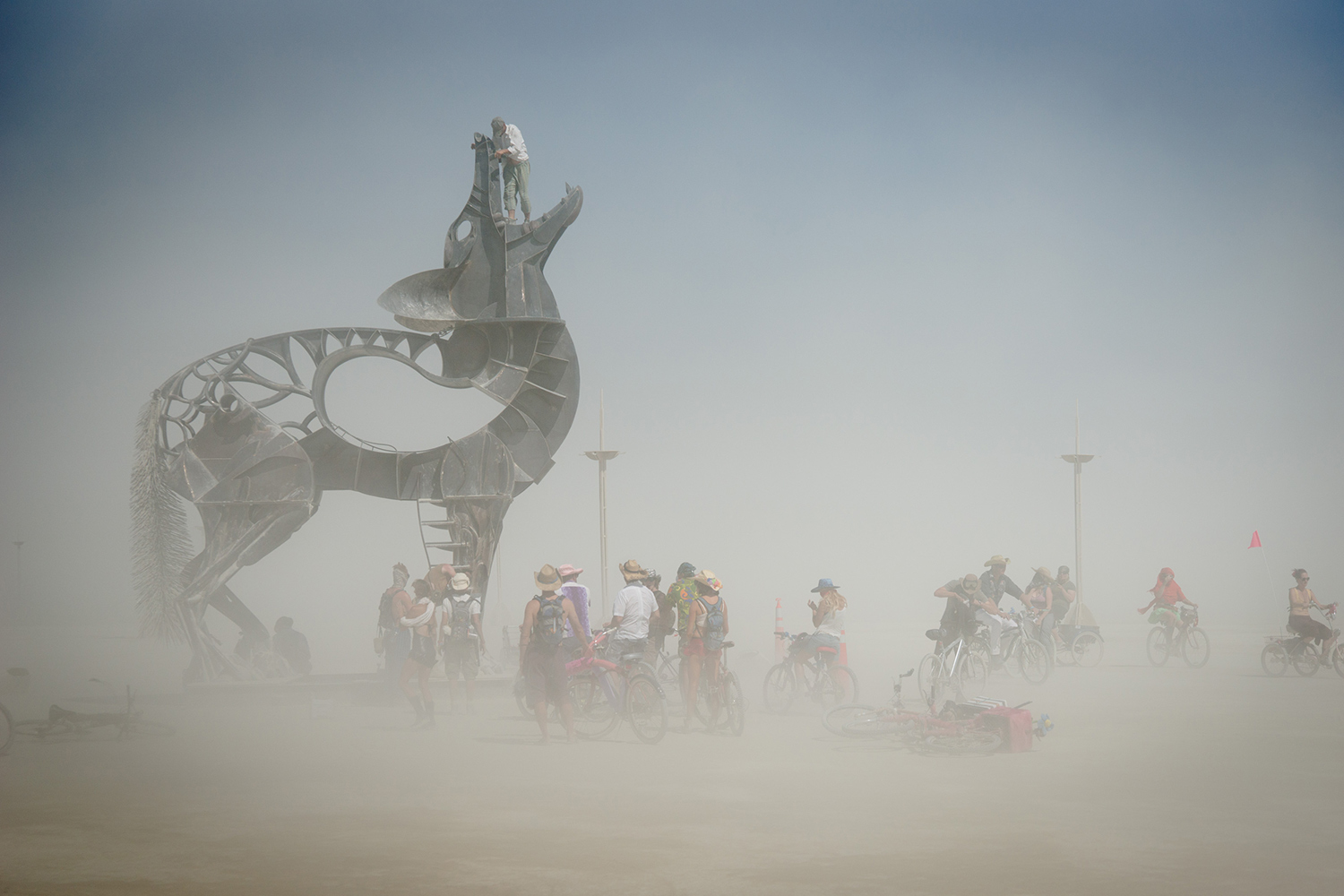 And then that hat sailed into view. It had belonged to Harvey’s father, and was one of the few possessions Harvey kept after his death. (Years later, at another Burning Man, the hat blew away in the wind, and Harvey bought replacements to wear up until the last two years of his life.)

“He was very, very, dapper,” Goodell said. She was walking with friends and shooed them away so she could talk to Harvey. “I immediately jumped into his path.”

Nothing came of the conversation. But that fall, Goodell was invited to a party back in San Francisco that she knew the organizers would attend. She didn’t know many people, but went anyway, standing in a corner for a few hours with a six-pack of beer at her feet. A woman began to chat with her, and brought Goodell deeper into the party, to the wild part, where people were really letting loose.

There, she met Harvey again. It stuck, finally. They stuck. Late that night, Harvey looked for her again, and she gave him a ride home, or he took her car; it’s a little fuzzy. Sure, he was dating someone at the time (another organizer), and Goodell was, too. “It took me a while to figure that one out,” she said.

Harvey and Goodell fell in love. She first helped at Burning Man in the capacity of “Larry’s girlfriend.” Goodell, an English major at Goucher who had earned an M.F.A. in photography from the Academy of Art in San Francisco in 1995, was working as a project manager building ford.com. She was the website’s fifth employee.

By 1997, the organizers, a total of six with Goodell and Harvey, formed an LLC. They called themselves the founders. They were, and are, a family—two, in fact, are married. Goodell quit her job and lived on savings for the next year as they worked on Burning Man. In 1998, the festival made a profit for the first time. 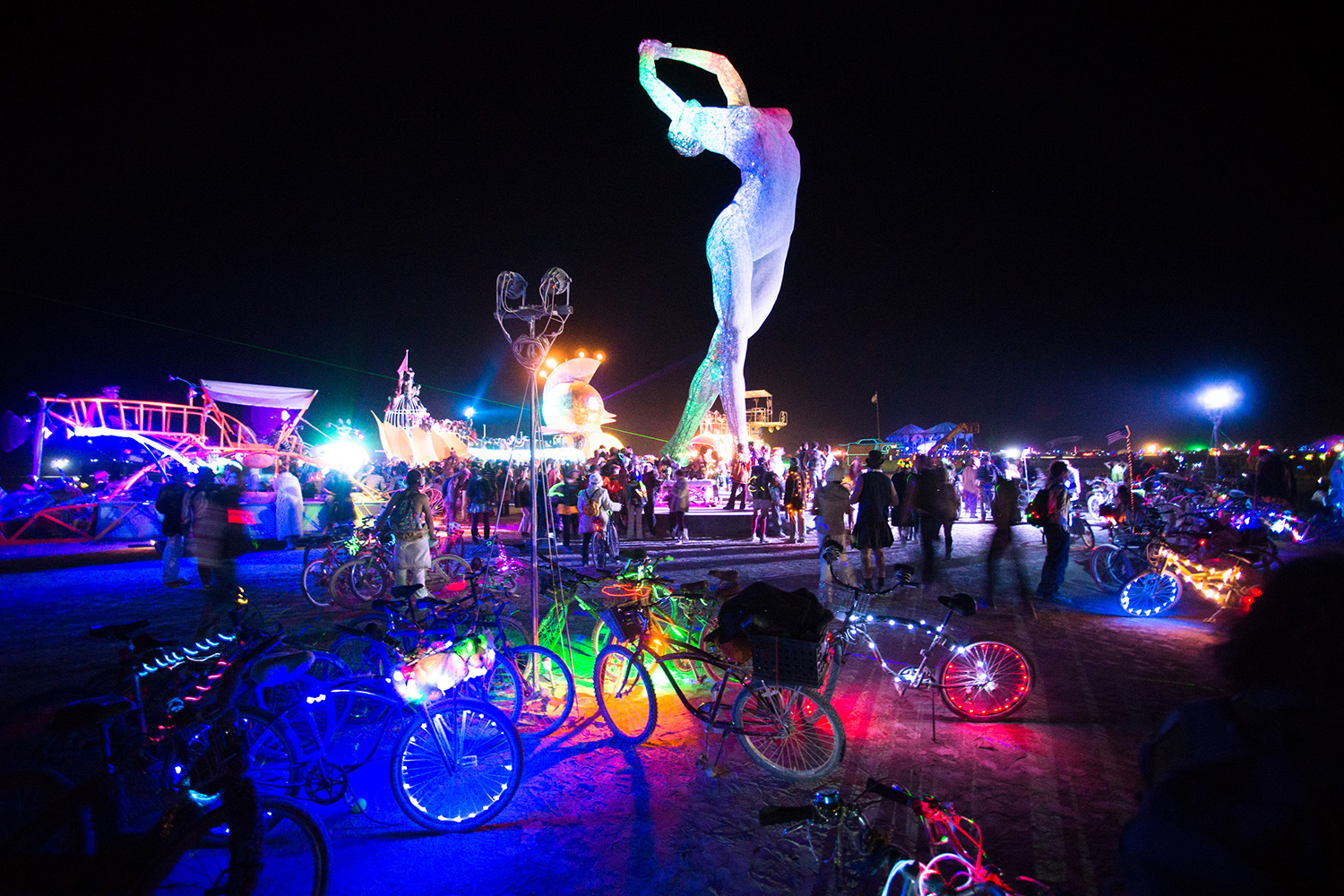 The networks of Burners—as attendees are called—were growing around the country. Goodell set up email addresses for contacts in different cities, and meetups proliferated. As more people got involved, the same philosophical questions kept coming up. Why do people have to take their trash out with them? Why don’t you sell anything? Goodell’s contacts were looking for practical answers to philosophical questions.

Harvey was fed up with the constant interrogations, and all the founders wanted to decentralize the culture of Burning Man. At Goodell’s urging, Harvey decided to write up a list of the festival’s values to share on the network’s listserv. He went on vacation and came back with nine principles: radical inclusion, radical self-reliance, radical self-expression, communal effort, civic responsibility, gifting, decommodification, participation, and leave no trace. The other founders immediately ribbed him for it.

“We were like, ‘Nine!? Why not 10?’” said Goodell, laughing at the memory. “He looked at us, astounded that he’d done all this hard work and we were giving him a hard time.” The next day, he came back with the 10th, and ultimately his favorite, principle: immediacy.

“Immediate experience is, in many ways, the most important touchstone of value in our culture,” Harvey wrote of the principle. “We seek to overcome barriers that stand between us and a recognition of our inner selves, the reality of those around us, participation in society, and contact with a natural world exceeding human powers. No idea can substitute for this experience.” 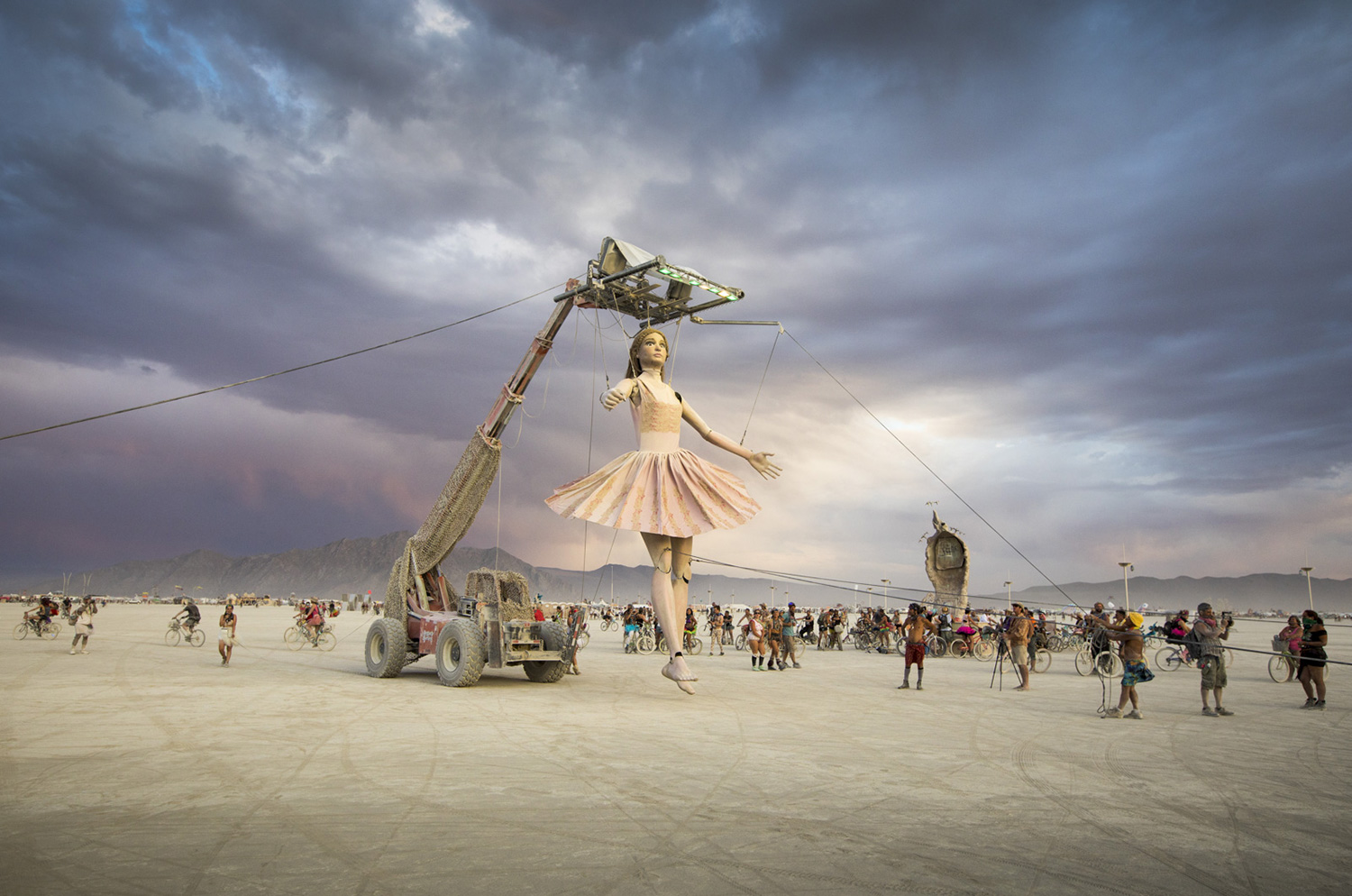 In 2011, the founders announced they had agreed to turn the LLC into a nonprofit, removing the ownership structure, which was more in line with the event’s philosophy. The process took several years, and Goodell was made CEO in 2013, as she was trusted by the others to handle the transition expertly. After all, she had worked hard on the festival for years, had management experience from ford.com, and she had been student body treasurer back at Goucher.

By 2014, the transition to nonprofit status was completed. In the following years, Goodell and her fellow founders noticed American culture and society was changing, and so was Burning Man. More and more RVs showed up, as people wanted the convenience and luxuries of the modern world with them in Black Rock City: air conditioning, private bathrooms, full kitchens. Concierge groups were popping up, offering to take care of everything for their clients in exchange for tens of thousands of dollars. But that went against the whole point of Burning Man: radical self-reliance, civic responsibility. And what about communal effort? 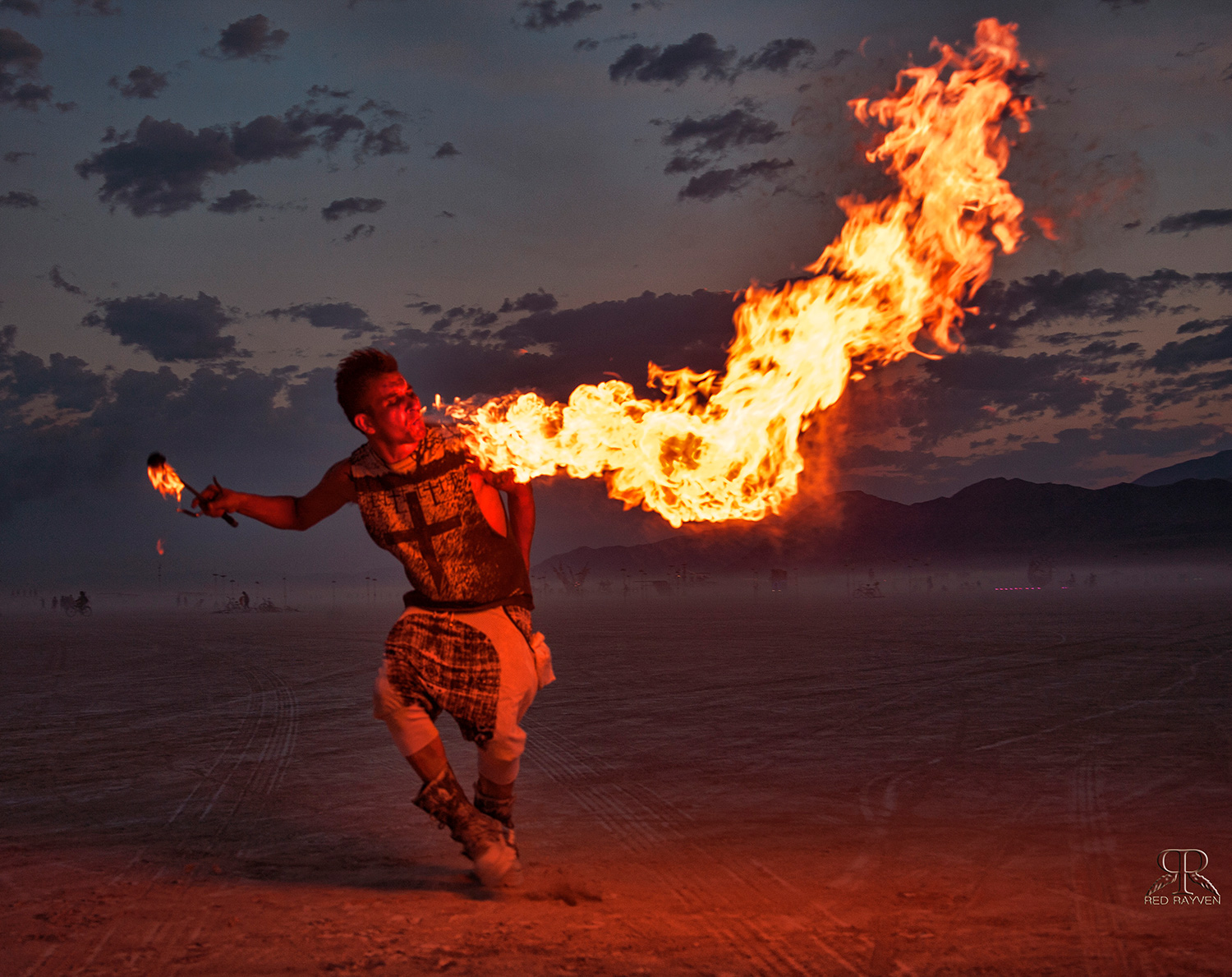 The founders recognized they had played a part in it, taking fees from the RVs and issuing mostly warnings to rule-breakers. So in the fall of 2018, Goodell, in her role as CEO, began to draft a post about some cultural course corrections. The nonprofit changed the way some ticket sales are run, and Goodell urged attendees not to buy packaged deals. While theme camps, where groups of people camp and work together under a theme, are still welcome, the concierge camps are not, and those unwilling to change will be banned. Published quietly this spring on Burning Man’s website, Goodell’s post was picked up as a major news story and feted widely in the Burner community.

Attendance is capped at 80,000, and the founders don’t plan to grow Black Rock City larger than that. But the ethos of Burning Man is still spreading worldwide, as is the event itself. It’s happening naturally, says Goodell. The thing that brings people to Burning Man—the thing that burns inside them—compels them to bring it home. And so there is now a Burning Man in Switzerland, in Japan, in South Korea, and in Australia. Thirteen thousand people went to one in South Africa. At Burning Man, at any Burning Man, no one tells you how to act or what to do. Burning Man creates an environment where people have to figure it out.

“The goal is for you to go do it yourself,” Goodell said. “Be the radical self-reliance and the communal effort and civic engagement; show up as a citizen in humanity. You don’t have to go to Black Rock City to feel good about other people. Just go be that person.” 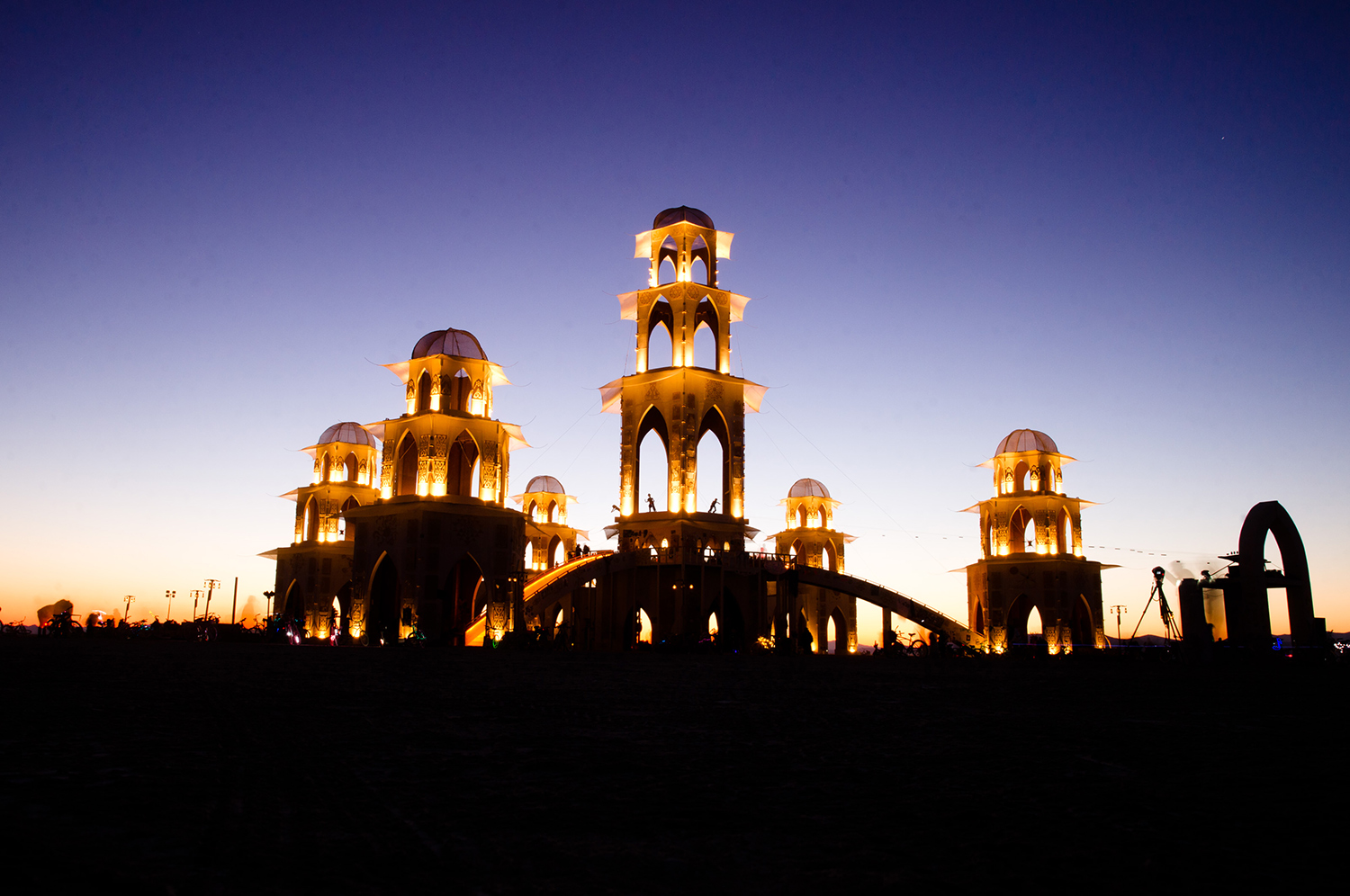 Larry Harvey died in April of 2018. He and Goodell were together five years; when they broke up, their relationship turned deeper than that of lovers. “He was really my best friend,” Goodell said. “The six of us were really close, and we fought like kids, but we got this thing from nothing.”

Some Burners say you should never make a major life decision right after Burning Man. You’re open; you’re vulnerable. You gaze at everything with love, but also with a new starkness. You want to maintain that sense of warmth, so some people quit their jobs and others leave spouses.

Goodell would never tell people not to change their lives after Burning Man. It’s changed hers so much. Back in the early days, after all, she quit her own job and boyfriend. Marian Goodell regrets nothing. 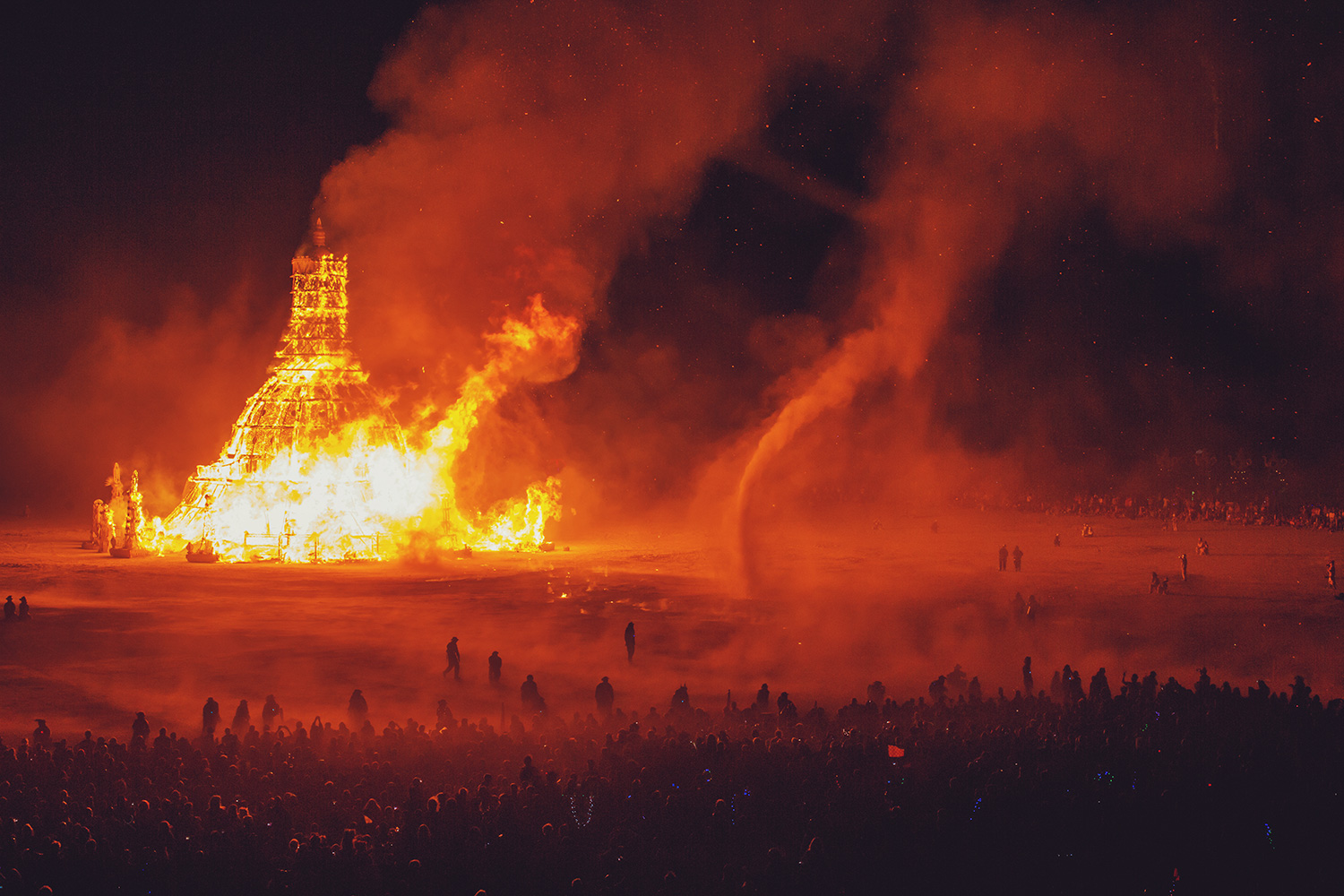 “The Temple of Grace,” by artist David Best and crew. Photo by Zipporah Lomax.