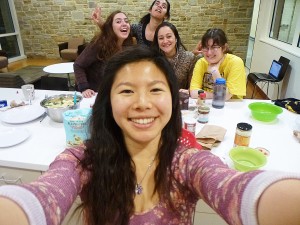 Hello, ¡Hola!, and 大家好!  My name is Amy and I’m an Environmental Studies major who speaks Chinese and Spanish (following a loose definition, at least). As others mention, living in Language House is a fantastic experience. From icebreakers to food events, all involved are very friendly and open. One might suppose that a disconnect exists between Language House residents and its directors, but this is far from the truth; Jeanne and Maite are half—if not more!—of the reason Language House is so great. I doubt there are many colleges where professors sing and cook with their students.

While I may not necessarily have gone to many events requiring me to speak only in Spanish, living here encourages me to converse with my peers in Spanish (and even Chinese) every so often. I’m definitely self-conscious about my current language abilities, so this smaller, more casual environment is more comfortable for me compared to a larger one with more fluent speakers (which still slightly intimidates me at the moment). Language House isn’t some separate enclave for fluent foreign language speakers; it’s an inviting environment for those interested in practicing languages and broadening their worldviews.

Living in Language House has also indirectly allowed me to experience a small taste of cultural (and linguistic) immersion. Considering Goucher students come from all over the country (and even outside of it), going home during holidays is not always feasible; I myself am from southern California. Over Thanksgiving break, a friend (another Language House resident!) was kind enough to take me in; consequently, I stayed at her house and was surrounded by—if not bombarded with—the Spanish language for five days. While I was too shy and embarrassed to speak any of the Spanish I knew (save the last day), it was very rewarding for me when I did understand portions of conversations.

I like to tell myself that I’ve contributed to the relaxed and non-judgmental atmosphere of Language House. On the flip side, living in such a dynamic environment also raises questions of diversity and the possible tensions arising from it. My friends and I who reside in Language House have definitely had some more serious discussions about this topic; while these conversations may have occurred regardless of our housing, I do think the location does have something to do with it. Cheesy as it may be, Language House was one factor which brought us together—perhaps it can be thought as the catalyst. The constant encouragement to experience different cultures and take on new perspectives really gave us some food for thought. I, as well have others, have contributed to the healthy growth of acceptance and the challenging of existing stereotypes.