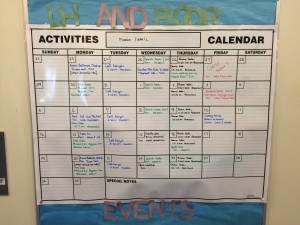 Check out the hallway calendar for regular updates about our activities! It’s color-coded and everything. 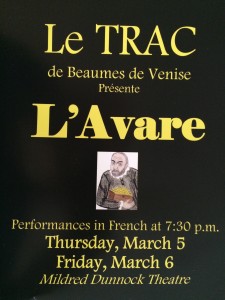 Members of the Goucher community, along with the French theatre troupe Le Théâtre Rural d’Animation Culturelle de Beaumes-de-Venise (Le T.R.A.C.), will present a production of “L’Avare” (The Miser).

Written by Molière, a French playwright and actor considered to be one of the greatest masters of comedy in Western literature, the play takes a humorous look at greed and romance. Le T.R.A.C.’s lively productions have won over audiences at all levels of French proficiency during previous tours throughout Europe and the United States, including at Goucher. Although this classic will be presented in French, an English synopsis will be provided.

Hello everyone! Join us for a very special café français in Heubeck at 5:30pm tonight. You’ll get to meet the French actors if you haven’t done so already. Just think, it might be the only café français all year where the French outweigh the Americans! Hope to see you there.