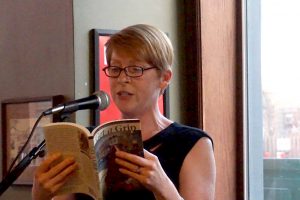 Professor Kathy Flann has won the 2016 Best Book Award in the short story category for her collection Get a Grip. Get a Grip previously won the 2014 George Garrett Fiction Prize, as well as the 2016 International Book Award and the National Indie Excellence Award in the short story categories. The book was also named one of the Best Books of 2015 by Baltimore magazine, and one of the top 10 Baltimore Books by the Baltimore City Paper. Flann is described by Baltimore magazine as “a master at developing her characters and creating plots that have you gripping, so to speak, on every word.”

Flann, an associate professor of creative writing, has taught at Goucher since 2008. She has also published the short story collection Smoky Ordinary, which won the Serena McDonald Kennedy Award. Her fiction has appeared in Shenandoah, The North American Review, The Michigan Quarterly Review, New Stories from the South, and other publications.

The Best Book Awards are put out every year by i310 Media Group, with winners from both mainstream and indie presses. Over 2,000 books were submitted for consideration this year alone.