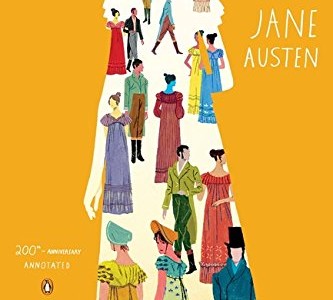 “With this anniversary edition,” Wells says, “I wanted to open Austen up to people who hadn’t given her a try before, and to support their reading experience by using everything I know from years of teaching undergraduates and from talking with everyday readers.”

The celebration will be held outside the Hyman Forum of the Sanford J. Ungar Athenaeum, from 3 until 5 p.m. on Tuesday, September 29, 2015. Just look for the Penguin Book Truck in the driveway—it will be open from 10 a.m. to 6 p.m.

This is the first event in the Goucher College Library’s Emma In America campaign, which will continue through the 2015-16 academic year to observe the 200th anniversary of the novel’s publication. As part of the anniversary, the library is raising funds to digitize a rare first American edition of the book from the college’s collection, one of only six known to exist.

“Emma is special because it’s the capstone of Austen’s career as an author,” Wells says. “She had already published three novels (Sense and Sensibility, Pride and Prejudice, and Mansfield Park), and she was at the very top of her game as a writer. She didn’t know it, of course, but Emma would be the last book she saw through to publication. When Austen died in July 1817, she left two essentially completed novels (Northanger Abbey and Persuasion), which her brother published at the end of that year. So Emma is the last Austen novel that was published in the exact form that she herself approved.”

For more information about this and other Emma In America events, including a lecture by Alexander McCall Smith and the library’s upcoming Emma Exhibit, click here.