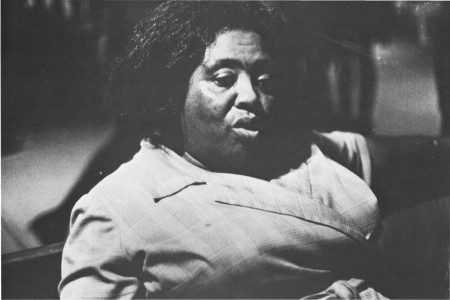 A newly digitized speech by civil rights activist Fannie Lou Hamer is now available to the public for the first time through the Goucher College Library.

Hamer was a black sharecropper from Mississippi who joined the voter registration movement in 1962 and became a fiery and respected voice for civil rights. She is especially well known for her 1964 televised account of being jailed and severely beaten while registering to vote—a speech President Lyndon Johnson interrupted solely to divert press coverage from Hamer. Hamer later became a sought-after speaker at colleges and universities around the country.

The Goucher College Library has just made available a recording of Hamer from 1970, when she spoke at the college at the invitation of Professor of Women’s Studies Marianne Githens.

Githens recalls reaching out through mutual friends who had worked with Hamer in the Mississippi Delta: “I talked to them about how wonderful I thought she was, and how I would love to bring her to Goucher.”

She says inviting Hamer to Goucher was not uncontroversial. Some at the college felt an unlettered woman from Mississippi was not an appropriate speaker—a bias Hamer felt throughout her career of activism. Hubert Humphrey, at the behest of President Johnson, said of Hamer in 1964, “The President has said he will not let that illiterate woman speak on the floor of the Democratic convention.”

Githens remembers Hamer’s speech well. “It was wonderful to hear her,” she says, “and I think it did make a very important and positive impression on some of the students.”

The theme of Hamer’s speech was extending the fight for civil rights to a fight for universal human rights. She recounted her childhood in Mississippi, her fight to register to vote, the founding of the Mississippi Freedom Democratic Party and later the Freedom Farm Co-operative, and linked her experience to a broader struggle for human rights, involving people of all races. She exhorted the audience to action. “I know somebody’s going to get mad,” she says in the recording. “There’s nothing wrong with you being mad tonight, when I’ve had a chance to be mad for 50 years.”

In her speech at Goucher, Hamer touches on many of the themes that ran through her later speeches, according to Dr. Maegan Parker Brooks, author of the Hamer biography A Voice That Could Stir an Army and co-editor of The Speeches of Fannie Lou Hamer: To Tell It Like It Is.

Brooks called the Goucher speech “truly remarkable.” “It is one of the longest speeches to a Northern audience we have on record,” she says, “making it significant in the sense that it encompasses so many of Hamer’s rhetorical hallmarks in one text.”

According to Brooks, the audio quality of the speech is the clearest of any recordings of Hamer’s throughout her career, which Brooks says give audiences “a vivid sense of what it was like to experience the indomitable Hamer’s discourse first-hand. This recording of the acclaimed human rights activist Fannie Lou Hamer’s speech at Goucher College is truly a rhetorical and historical treasure.”

For more speakers, check out Goucher’s Speaker Collection at our Digital Library.