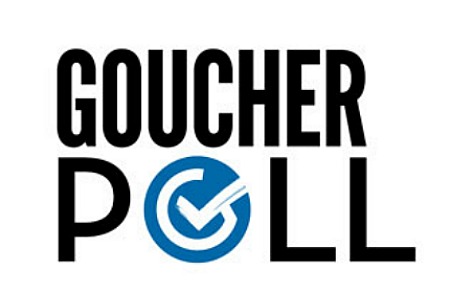 The Goucher Poll asked Maryland residents for their perspectives regarding perceptions of elected officials and institutions; most important issues and direction of the state; redistricting; state budgetary priorities; potential presidential runs of Martin O’Malley, Bob Ehrlich, and Ben Carson; key environmental issues, including fracking, the “rain tax,” and sources of pollution; transportation issues, including support for the Red and Purple Lines; and other issues being considered by the Maryland General Assembly.

Residents continue to support Comptroller Peter Franchot’s “Let Summer Be Summer” initiative. Seventy-two percent support a statewide mandate requiring schools to start after the Labor Day holiday; 19 percent oppose it. Respondents were then asked why they support or oppose a post-Labor Day start.

Three-fourths of Marylanders support requiring businesses with staffs of 10 or more people to offer their employees an hour of sick leave for every 30 hours worked; 21 percent oppose this proposal.

Marylanders were also asked about the “Death With Dignity” legislation recently proposed by state Senator Ron Young (D-Frederick and Washington). Respondents were asked if they support or oppose a policy that would allow terminally ill patients to obtain a prescription for a fatal dose of drugs from a willing doctor. Respondents were also informed that the bill requires the patient to be mentally competent, self-administer the drugs, and have less than six months to live. Sixty percent of residents support the policy, and 35 percent oppose it.

While most Marylanders are still unsure how to rate Governor Larry Hogan after his first month in office, those who can rate the job performance of the new governor view him in a positive light. Thirty-nine percent approve of the job he is doing; 17 percent disapprove; and 43 percent did not offer an opinion. Similarly, 33 percent have a favorable opinion; 21 percent have an unfavorable opinion; and 45 percent did not offer an opinion.

When asked about the Maryland General Assembly, 33 disapprove of the job it is doing, and 46 approve; 21 percent don’t know.

Compared with the fall Goucher Poll, Marylanders express a more optimistic view on the direction of the state: 54 percent think Maryland is going in the right direction, while 34 percent think things in the state are going down the wrong track. In terms of trust in government, 66 percent say they can trust the state government to do what is in the public’s interest “some” of the time; 5 percent say “all of the time;” and a quarter say “very little” or “none” of the time.

Twenty-four percent of residents think cooperation between the Democrats and Republicans in the state government will increase; 52 think it will stay about the same; and 21 percent think cooperation will decrease.

Respondents were asked to indicate what percent of seats in the Maryland General Assembly were held by women: 23 percent gave a correct response (25-35 percent); 61 percent underestimate the number (24 percent and lower); and 8 percent overestimate it (26 percent and higher). Currently, women hold 31% of the seats in the Maryland General Assembly—the seventh-highest in terms of women’s representation in the nation.

Marylanders identify the economy and jobs (24 percent), taxes (19 percent), and education (16 percent) as the biggest issues facing the state.

“The Hogan administration is off to a good start in the eyes of many Marylanders. Understandably, with only a month of service under his belt, many residents are still unsure how to rate the new governor—but overall trust in the state government and views on the direction of the state are more positive than in recent years,” said Mileah Kromer, director of the Sarah T. Hughes Field Politics Center. “His support for redistricting reform and focus on economic, job, and tax issues has broad backing in the constituency. However, he will have to find common ground with Democrats in the General Assembly on funding education if he wants to earn high approval ratings from the citizenry moving forward.”

Marylanders and the U.S. Presidency

Three Marylanders have been mentioned as potential candidates for the 2016 presidential election—former governors Martin O’Malley and Bob Ehrlich and retired neurosurgeon Ben Carson.

Thirty-one percent of Marylanders think Martin O’Malley should run for president in 2016—a 12-point increase from the fall 2014 Goucher Poll. Twenty-two percent of residents think Bob Ehrlich should run, and 30 percent think Ben Carson should run.

Environmental Issues: Fracking, Pollution in the Bay, and the Storm Water Management Fee

Residents were asked their opinions on fracking, the storm water management fee, and sources of pollution in the Chesapeake Bay.

A majority of Marylanders recognize there are high or moderate levels of hydraulic fracturing that occurs in the neighboring states of Pennsylvania (55 percent) and West Virginia (53 percent).

Residents were then asked their opinions on key economic and environmental concerns in regard to fracking.

Residents were asked about their perceptions concerning sources of pollution in the Chesapeake Bay.

Marylanders were also asked to weigh in on the much-debated storm water management fee, commonly called the “rain tax.”

For respondents who received the question without “rain tax” included:

For respondents who received the question with “rain tax” included:

“While most increases or additional fees are met with public scrutiny, few have received the amount of sustained negative attention and public outcry as the storm water management fee,” said Mileah Kromer, director of the Sarah T. Hughes Field Politics Center. “Our results show that residents do not view runoff from their properties as a major source of pollution in the bay. Couple this perception with major tax and fee fatigue among residents and add in the politically savvy labeling of the storm water management fee as a tax on the rain, and you have a major headache for environmentalists and likeminded Democrats in the state.”

Fifty-two percent of Marylanders support making the use of marijuana legal in Maryland; 44 percent oppose.

Fifty-five percent disagree that marijuana is a “gateway drug”—i.e., it leads to the use of hard drugs; 43 percent of respondents agree.

Nearly three-quarters of Marylanders view heroin as a major problem in Maryland today; 20 percent think it is a minor problem. Less than 1 percent of residents think it is not a problem at all.

Residents were then asked how the state should address heroin abuse in the state:

Recent reports of measles have heighted nationwide attention on the subject of childhood vaccinations. In general, most Marylanders agree vaccines are effective at presenting disease (95 percent) and that non-vaccinated people pose a public health risk (83 percent). Nearly three-quarters of respondents think only vaccinated children should be allowed to attend public and private schools.

Additional crosstabs of the survey results are available upon request, and Mileah Kromer, the director of the Sarah T. Hughes Field Politics Center, is available for comment. She can be reached at mileah.kromer@goucher.edu or 410-337-3296. For additional media requests, please contact Kristen Pinheiro, senior director ofcommunications, at 443-253-3680 or kristen.pinheiro@goucher.edu.