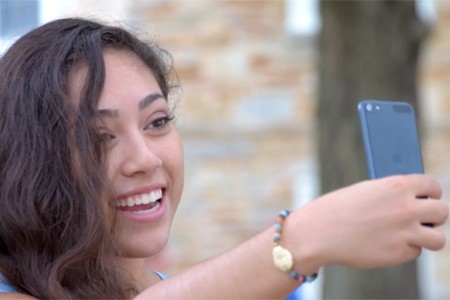 Goucher College became the first college in the nation to allow students to submit video applications as the decisive factor for admission. The launch of the Goucher Video Application (GVA), last September, created a big stir both in higher education circles and in national print and broadcast media, including The New York Times, NPR, PBS, USA Today, The Washington Post, Slate.com, and The Chronicle of Higher Education.

By the December 1 deadline, 64 Goucher video applications (GVA) were submitted from students at 60 plus high schools in 20 states across the nation. The students who applied via the GVA represent almost 30 intended majors, including communications, biology, pre-med, business management, and international studies.

When President José Antonio Bowen envisioned the Goucher Video App, a primary goal was to create an alternative admission process that would help to negate the socioeconomic inequities often perpetuated in the traditional application process. The application was intended to help reach a broader population of students who are too often marginalized in college admissions.

An important success of the GVA is that 52% of the video applicants identify themselves as students of color, compared with 42% of students who applied using the Common or Universal College applications. Among the GVA applicants, 39% identified as African American, which is more than double the 18% among non-GVA applicants.

Of the 64 GVA applicants, about 75% will be admitted, which compares with 72% for students who apply using the traditional methods for applying. Goucher’s admissions counselors have pointed out that the students who have applied using the video application did a good job of self-selecting and represent the many kinds of students who succeed at Goucher.

The Office of Admissions has transcripts for 24 of the GVA applicants—transcripts were required for consideration for financial aid—and they have academic qualifications that are comparable to those of other students who gain admissions to Goucher. The GPA of the video applicants averaged 3.11, closely compared with 3.18 for those students who applied using traditional methods.

There were 14 applicants who were rejected through the Goucher Video Application review process. They are being encouraged to submit a high school transcript, school counselor recommendation, and other supporting materials before a final admissions decision can be made. Additionally, there were two students who submitted materials that could not be viewed. The Office of Admissions is working with these students to access the videos and other admissions materials.

When the GVA was conceived, President Bowen had imagined receiving about 40 video applications during the first admissions cycle the alternative application was an option for students.

The 64 GVAs that were submitted helped contribute to Goucher receiving the highest number of Early Action applications in its history: 1,825 compared with 1,574 in 2014 and 1,562 and in 2013 (as of early January for each year).

“We took a risk with the Goucher Video App, and we are optimistic it is paying off,” said Bowen. “At the very least, we have introduced a bold new idea that distinguishes Goucher, and we have helped start an important discussion about repairing the broken college admissions process. We also have attracted an impressive number of students with high potential and an ability to thrive at our college.”

Each application—including the two-minute video, a brief application form, a signed statement of academic integrity, and two works of scholarship—were closely reviewed by an admissions counselor and a faculty member, who made recommendations regarding acceptance to a larger review committee. Admitted students will be notified by February 1 and must commit to attending Goucher by May 1.

“We have been so impressed by the thoughtful, compelling stories prospective students told through their video applications,” said admissions counselor Christopher Wild. “We thoroughly reviewed their complete applications, including their supplemental admissions materials, and look forward to seeing how admitted video applicants will enliven and enrich our campus community.”

Nina Kasniunas, a faculty member who helped develop the GVA process and who was a video application reviewer, added, “Now that the Goucher Video Application has been rolled out, we are glad to see that the experiment seems to be working. Not only has there been an increase in the quantity of all overall applications, we are seeing continued academic quality from an increasingly diverse pool of prospective students.”