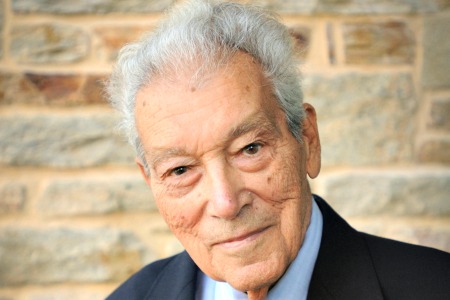 Members of the Goucher College community were saddened to learn about the death of Wolfgang E. Thormann early on the morning of January 5. Dr. Thormann was a dedicated and well-respected professor in Goucher’s Department of Modern Languages (now the Department of Languages, Literatures, and Cultures) for 30 years.

Dr. Thormann was born in Frankfurt, Germany, in 1924. His family immigrated to Paris in 1933, away from Hitler’s regime (his father, journalist and critic Werner Thormann, wrote against National Socialism). In 1942, after a harrowing escape from the Gestapo in Paris, he moved to the United States, where he briefly studied at St. Joseph’s College in Philadelphia.

In 1943, Dr. Thormann became a naturalized American citizen and served as a master sergeant for two years in the U.S. Army’s Military Intelligence Service in Europe, followed by a year of service in the War Department during the Nuremberg War Trials.

At Goucher, he assumed the chairmanship for the Department of Modern Languages from 1960 to 1971 and again from 1979 to 1989. Dr. Thormann was regarded as an outstanding and innovative teacher and an involved administrator. He believed in teaching language through culture and in study abroad: He created a three-week intensive program in Paris, decades before ICAs existed at Goucher. He was in high demand as a public speaker for academics and gave numerous talks to the Alliance Française and groups with an interest in France.

Dr. Thormann received a number of awards, including a President’s Citation by the City Council of Baltimore and an award for outstanding service and teaching from the Goucher College Board of Trustees. The French government also named him a Chevalier in the Order of the Academic Palms for his contributions to the teaching and spreading of French culture.

After his retirement in 1990, Dr. Thormann continued helping the department in several ways. Wolf, as he was known by his friends, colleagues, and family, occasionally substituted for French instructors, and over the recent years, he was regularly invited to classes in French and in German to talk about his experience during World War II. He was an amazing raconteur who enthralled the students.

“Goucher’s Modern Languages, Literatures, and Cultures faculty is deeply saddened about the loss of our beloved ‘Grand Chef’ Wolf Thormann,” said Associate Professor Uta Larkey. “We are deeply indebted to him and will always cherish his wisdom, support, and great sense of humor. Wolf had an intriguing life and was a wonderful, insightful mentor.”

Dr. Thormann will be missed by the members of the Goucher community, who offer their condolences to Monique, his wife of 61 years; his sons Dominique, Jean-François, and Daniel; and his grandchildren.