Goucher Ranked No. 1 in Study Abroad 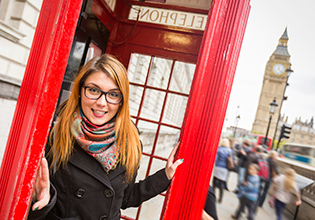 This commitment to educating students to become global citizens has earned Goucher College important recognition from national and international publications:

• The Princeton Review ranked Goucher No. 1 on its 2014 list of schools with the “Most Popular Study Abroad Program.”

• Fiske Guide to Colleges 2014 cites Goucher for its “long-standing history of excellence” and its study abroad requirement for all undergraduates. Students surveyed for the guide say Goucher is “a small college with a big view of the world” because its “students learn not only how to relate to different cultures, but also how to function effectively within them.”

• Goucher was also ranked No. 1 on Best Choice School’s list of 45 Top Colleges to Study Abroad, based on the percentage of students who participate in overseas education.

Goucher has more than 60 programs in 32 countries. Students explore the cloud forests of Costa Rica; teach in rural schools in South Africa; learn and speak foreign languages in Argentina, China, France, Germany, and Russia; and so much more.

Students have the option of doing the traditional semester abroad, but Goucher also offers yearlong programs as well as three-week Intensive Courses Abroad (ICAs) led by Goucher faculty during the college’s winter and summer breaks. Many of these intensive living-learning experiences are preceded by a weekly pre-course, allowing students and faculty to engage in in-depth study of the topic and region.

Goucher believes that in the global community of the 21st century, all students are need to cultivate an international perspective by thinking, communicating, working, learning, and living in another country.