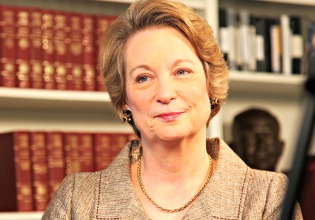 Margot Perot, a member of the Goucher College Class of 1955, also will be awarded an honorary degree. She and her husband, Ross Perot, the former independent candidate for president of the United States, are among the country’s most outstanding philanthropists, and they have also been generous to Goucher. Senators Benjamin L. Cardin and Barbara A. Mikulski also will be receiving honorary degrees for their service to the citizens of Maryland and to Goucher College.

President Sanford J. Ungar will preside over the ceremony, which will begin at 10:30 a.m. on the Margaret M. Winslow Great Lawn, between the Athenaeum and Katharine and Jane Welsh Hall. For more information, visit www.goucher.edu/commencement.

Susan Eisenhower is one of the United States’ top energy security strategists and an outspoken advocate for setting national priorities and advancing a civil, fact-based discourse on the challenges this country faces.

She is the president of the Eisenhower Group, Inc., which provides strategic counsel on political, business, and public-affairs projects. She has consulted for Fortune 100 and Fortune 500 companies that do business in the emerging markets of the former Soviet Union and for a number of major institutions and companies engaged in the energy field. She also is the founding director, first president, and former chair of the Eisenhower Institute’s Leadership and Public Policy Programs, for which she became known as a leading expert in the former Soviet Union and in the energy field.

In January 2010, U.S. Secretary of Energy Steven Chu appointed Eisenhower to serve on the Blue Ribbon Commission on America’s Nuclear Future, which has been tasked with developing a long-term solution for safely managing the back end of the nuclear fuel cycle.

She has testified before the Senate Armed Services and Senate Budget Committees on policy regarding the former Soviet Union. She was also appointed to the National Academy of Sciences’ Standing Committee on International Security and Arms Control, where she served for eight years.

Eisenhower has been a fellow at Harvard University’s John F. Kennedy School of Government’s Institute of Politics and a distinguished fellow at the Nixon Center. She sits on the boards of the Nuclear Threat Initiative, co-chaired by former Sen. Sam Nunn (D-GA) and media entrepreneur and philanthropist Ted Turner, and the Energy Future Coalition. She is an advisor to the U.S. Chamber of Commerce’s Institute for 21st Century Energy and the Air Force Academy’s Eisenhower Center for Space and Defense Studies.

Eisenhower’s first career was as a writer. In the 1970s she lived overseas for six years, first while as a student at the American University in Paris and then as a London resident and stringer for The Saturday Evening Post. Later she wrote a column and covered business for Wolfe Newspapers before joining the global public relations and communications firm Burson-Marsteller.

She has authored three books, two of which, Breaking Free and Mrs. Ike, have appeared on regional best seller lists. In 2000, a year before September 11, she co-edited a book, Islam and Central Asia, which carried the subtitle, An Enduring Legacy or an Evolving Threat? She has also edited four collected volumes on regional security issues; the most recent, Partners in Space (2004), was also published in Russia by Nayuk, the publishing house of the Russian Academy of Sciences.

Eisenhower has written chapters for a number of collected volumes and penned hundreds of op-eds and articles on foreign and domestic policy for publications such as The Washington Post, The Los Angeles Times, USA Today, and The London Spectator.

She has provided analysis for news outlets such as CNN International, MSNBC, Fox News, and the BBC. Eisenhower has appeared on many TV programs, including “Nightline,” “World News Tonight with Peter Jennings,” “This Week with David Brinkley,” and “CBS Sunday Morning with Charles Kuralt,” and in documentaries such as Oliver North’s War Stories, Sony Pictures’ Why We Fight, and, most recently, Sputnik Mania.

Following her famous grandfather’s lead, Eisenhower was a lifelong Republican. Then in 2008, she became an independent and chose to support Barack Obama for president. Always one to employ strategic perspectives and critical thinking, she said she arrived at this decision determined to look at the issues not as a Republican or a Democrat, but as an American.