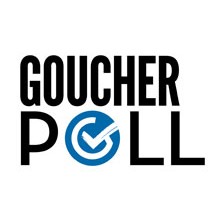 The Goucher Poll asked citizens for their perspectives regarding the job approval and favorability ratings of President Barack Obama, senators Ben Cardin and Barbara Mikulski, and the U.S. Congress. Citizens also were asked their opinions about the sequester and their trust in the federal government.

Fifty-six percent of Marylanders have a favorable view of President Barack Obama, a small decline from his 60 percent approval rating measured by the Goucher Poll five months ago. Thirty-eight percent hold an unfavorable view of the president. When asked to rate how well he is handling his job as president, 38 percent disapprove, and 57 percent approve.

Marylanders are displeased with the U.S. Congress: 84 percent disapprove, and only 10 approve of the way Congress is handling its job.

Citizens also were asked their opinions toward the sequester—budget cuts to federal spending that began on March 1, 2013. A sizable majority of Maryland citizens, 67 percent, indicated they were familiar with the sequester.

Residents indicating they were familiar with the sequester were then asked who they held responsible for the government not being able to reach an agreement before the sequester:

22 percent hold all of Congress and President Obama equally responsible

14 percent hold all of Congress, but not President Obama, responsible

Residents indicating they were familiar with the sequester were also asked about the potential economic impacts, if any, of the sequester:

68 percent believe the sequester will have a negative impact on the U.S. economy

“Marylanders are paying attention to and are concerned about the sequester,” said Mileah Kromer, director of the Sarah T. Hughes Field Politics Center. “With such a large proportion of the Maryland economy tied directly to federal government expenditures and funding—whether it be through defense spending, biotech research, or simply employment in a government agency—it is no wonder three-quarters of Marylanders believe the sequester will have a negative impact on the state’s economy.”

Additional crosstabs of the survey results are available upon request, and Mileah Kromer, the director of the Sarah T. Hughes Field Politics Center, is available for comment. She can be reached at mileah.kromer@goucher.edu or 724-840-0990.

More information about this round of poll results, including methodology, survey question design, sample demographics, and expanded data, is availble here.